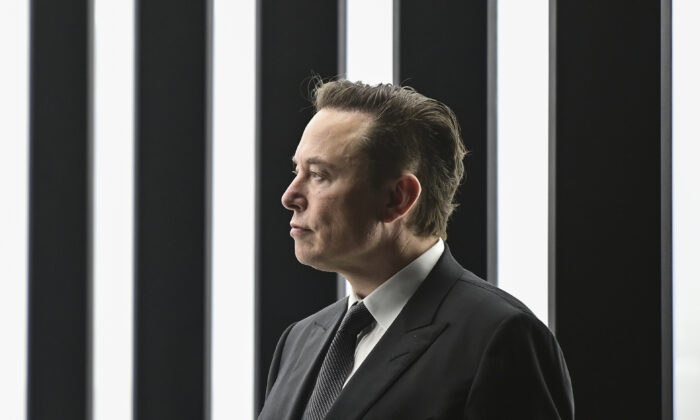 Twitter boss Elon Musk has revealed that the “most important data” from the social media platform’s internal communications on free speech suppression, known as the “Twitter Files,” was hidden and some may even have been deleted.
By Tom Ozimek

Musk made the remark in a Dec. 7 tweet, in response to former Twitter CEO Jack Dorsey’s question as to why the Twitter Files were being dropped in installments instead of being released in their entirety.

“If the goal is transparency to build trust, why not just release everything without filter and let people judge for themselves? Including all discussions around current and future actions? Make everything public now,” Dorsey said in a post on Twitter.

Dorsey was responding to a series of comments by Musk, in which the Tesla CEO told his followers to brace for an upcoming release of “Episode 2 of The Twitter Files.”

Musk reacted to Dorsey’s remarks by saying that key data had been hidden and possibly scrubbed.

“Most important data was hidden (from you too) and some may have been deleted, but everything we find will be released,” Musk said.

The exchange between Twitter’s current and former bosses comes hot on the heels of news that Musk apparently fired Twitter’s former deputy counsel James Baker, possibly for the alleged role he played in suppressing a Hunter Biden laptop story.

Investigative reporter Matt Taibbi, who with Musk’s endorsement posted the first episode of the “Twitter Files” on the platform on Dec. 2, suggested that the holdup with releasing the subsequent part of the disclosures had something to do with Baker’s role in “vetting” the first batch without the knowledge of Twitter’s current management.

Musk first teased the disclosure of Twitter’s internal files on what he described as the company’s “free speech suppression” at the end of November.

Days later, Musk shared a thread from Taibbi, which detailed a series of internal Twitter communications—dubbed the “Twitter Files”—that lifted the lid of the social media platform’s machinations around censorship.

Republicans had long accused Twitter—and some media outlets—of suppressing the Hunter Biden laptop story, which included reporting that bolstered claims that the president lied when he said he had no involvement in his son’s overseas business dealings.

In order to suppress the Hunter Biden report, Twitter executives marked it as “unsafe,” limiting its spread and even blocking it from being directly shared via the platform’s direct message function, Taibbi said. He also noted that such extreme restrictions were normally reserved for content such as child pornography.

Teasing a follow-on release of more information related to Twitter’s actions around censorship, Taibbi said in his thread that there was “much more to come.” He promised answers to questions around issues like “shadow-banning, boosting, follower counts, the fate of various individual accounts, and more.”

Musk initially said a second episode of the disclosures would be released shortly after the first data drop. On Dec. 4, Musk updated that it “looks like we will need another day or so.”

The “hidden” or “deleted” status of some of the Twitter Files, as mentioned by Musk, could be affecting the timing of the release of subsequent episodes of the disclosures.

In the first set of Twitter Files disclosures, Taibbi shared screenshots of internal communications from and among Twitter managers that showed actions around the platform’s suppression of a New York Post report on a laptop purportedly belonging to Hunter Biden ahead of the 2020 presidential election.

At the time, Twitter content moderators alleged that the Post’s report violated its policy around hacked materials. However, it was later revealed that the laptop wasn’t hacked but was simply abandoned at a Delaware computer repair shop.

“I support the conclusion that we need more facts to assess whether the materials were hacked,” Baker wrote to other Twitter officials in October 2020, according to a screenshot posted by Taibbi. “At this stage, however, it’s reasonable for us to assume that they may have been and that caution is warranted.”

Baker was also implicated in court documents filed by special counsel John Durham in a case against former Clinton campaign and Democrat lawyer Michael Sussmann, who allegedly relayed false information about Trump’s campaign to Baker when he was working for the FBI.

In the disclosures, Taibbi also reported that Baker headed Twitter’s process of reviewing the “Twitter files” before they were released to journalists. That revelation, Taibbi wrote, “surprised everyone involved.”

Musk on Tuesday evening wrote that he “exited” Baker from the company due to “concerns” about his possible role in suppressing important information, though the Twitter chief did not go into detail.

It remains unclear why Baker was tasked with reviewing files after Musk’s takeover of Twitter at the end of October.

Baker has not publicly responded to Taibbi’s reporting or Musk’s statement.

Taibbi said in a Dec. 6 thread titled “Twitter Files Supplemental” that questions have swirled around the delay of the release of subsequent episodes of the disclosures.

“We can now tell you part of the reason why. On Tuesday, Twitter Deputy General Counsel (and former FBI General Counsel) Jim Baker was fired. Among the reasons? Vetting the first batch of ‘Twitter Files’—without knowledge of new management,” Taibbi wrote.

He explained that after the first set of the files was released, “things became complicated” as he and journalist Bari Weiss, who was another reporter to whom the Twitter Files were disclosed to, struggled with “obstacles to new searches.”

Taibbi said that it was then discovered that the person “in charge” of releasing the files was James Baker.

Taibbi then noted Baker’s history working for the FBI and his ties to the widely discredited Steele dossier and the allegations that the Trump campaign had a secret back-channel to a Russian bank.

“Baker is a controversial figure. He has been something of a Zelig of FBI controversies dating back to 2016, from the Steele Dossier to the Alfa-Server mess,” Taibbi said. “The news that Baker was reviewing the ‘Twitter files’ surprised everyone involved, to say the least. New Twitter chief Elon Musk acted quickly to ‘exit’ Baker Tuesday.”

Musk took to Twitter to say that Baker was “exited” from Twitter due to concerns about his “possible role in suppression of information important to the public dialogue.”

Asked if Baker was asked to explain himself first, Musk replied, “Yes. His explanation was … unconvincing.”

Critics have argued that the suppression of the Hunter Biden report, which suggested that then-candidate Joe Biden knew about and was involved in his son’s overseas business dealings, may have been enough to sway the 2020 presidential election.

President Joe Biden has repeatedly denied having any knowledge of or involvement in Hunter Biden’s business deals.

A former Hunter Biden associate named Tony Bobulinski has repeatedly insisted that the elder Biden was lying when he claimed no involvement in his son’s business operations. In particular, Bobulinski has claimed that the president is the “Big Guy” repeatedly referenced in communications found on the laptop.

Shortly before the 2020 presidential election, Bobulinski came forward with a series of disclosures prompted by messages discovered on the laptop linked to Hunter Biden.

Among them was correspondence involving Hunter Biden where a 10-percent cut from a Chinese business deal would be “held by H for the Big Guy.”

The White House did not respond to a request for comment on Bobulinski’s claims.

In a statement to media outlets in October 2020, Bobulinski said that “Big Guy” was a reference to then-presidential candidate Joe Biden.

“Hunter Biden called his dad ‘the Big Guy’ or ‘my Chairman,’ and frequently referenced asking him for his sign-off or advice on various potential deals that we were discussing,” Bobulinski wrote at the time.

“The Biden family aggressively leveraged the Biden family name to make millions of dollars from foreign entities even though some were from communist-controlled China,” Bobulinski further alleged.

Both the president and his son have denied any wrongdoing and the elder Biden said during his final debate against then-President Donald Trump that “I have not taken a penny from any foreign source ever in my life.”

Bobulinski insists this is false.

Jack Phillips contributed to this report.