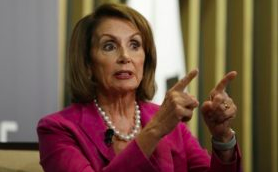 House Speaker Nancy Pelosi is secretly a fan of Florida Gov. Ron DeSantis — so much that she’s prepared to flee California for a cozy retirement in Florida.

Amid rumors of Pelosi’s pending retirement, there is also a rumor she just dropped a stunning $25 million to buy a huge mansion in the Sunshine State.

That’s according to reports from local sources, who claimed Pelosi had vpurchased an 11,000 square foot oceanfront home in Jupiter, Florida this week.

Nancy Pelosi just bought a 11,000 square foot $25 million mansion in Florida. Someone doesn't want to pay exorbitant taxes in her home state she has ruined. Climate change and global warming thrown out the door. pic.twitter.com/gRBoZnXZIK

Pelosi has not committed to running for reelection in 2022, and rumors have swirled that her retirement announcement is imminent.

Insiders believe Pelosi’s last effort to pass President Joe Biden’s massive “Build Back Better” spending bill, with an estimated price tag of nearly $2 trillion, would be one of her final acts.

Pelosi guided the massive social spending program through the House on Friday, sending it now to the Senate.

The House vote, with just one Democrat opposed, boosts momentum for Biden’s legislation after months of start-stop negotiations.

And for Pelosi, who breezed into the House chamber early Friday to gavel the vote closed after a nearly all-night session, the outcome serves as a career capstone.

The House had already approved a $1 trillion infrastructure package, a bipartisan roads-bridges-and-broadband measure favored by centrist lawmakers after election thrashings in Virginia and New Jersey served as a wake-up call to Democrats.

Republican Leader Kevin McCarthy, who is in line to become speaker if Democrats lose power as expected next year, set the tone in an overnight speech full of vitriol and grievance against Biden, the Democrats, and Pelosi in particular, as he chided her leadership and wished for her retirement.