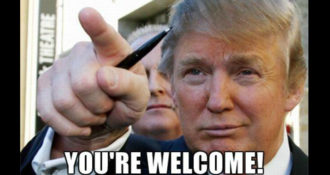 One of the most common arguments I am faced with on a daily basis from both liberals and conservative “NeverTrumpers” is that the President hasn’t accomplished anything “yet.”

This is a blatant lie.

President Trump has singlehandedly stemmed the flood of illegal immigrants entering our nation from the South. The Department of Homeland Security has reported a massive drop in illegal crossings and arrests and they have given most of the credit to the President.

He appointed Judge Neil Gorsuch who may well be the most conservative, liberty minded Supreme Court justice appointed to the Court in over 100 years.

And there is so much more, so make sure to share this information with the next person who tells you that President Trump hasn’t “accomplished” anything.

Check out More of this Information from the Truth Division.