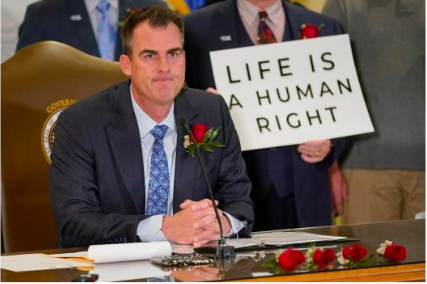 Oklahoma legislators passed a bill banning abortion after conception Thursday, and Republican Gov. Kevin Stitt is expected to sign it.

Stitt signed another bill banning most abortions throughout pregnancy April 12 which, according to The Wall Street Journal, will not go into effect until August. The new bill would go into effect immediately after being signed.

The bill bans abortion at the point of fertilization, with exceptions in place for rape, sexual assault, incest, the life of the mother, ectopic pregnancies and the removal of babies who have already died. The bill awaits a signature from Stitt, who previously pledged to sign any pro-life legislation that came to his desk.

Oklahomans are sending a strong message that all unborn children and their mothers in the Sooner State deserve urgent protection from the brutality of abortion.

The legislation states that it does not ban any contraception, including emergency contraception such as Plan B, which can cause the body to expel a fertilized embryo.

The bill would be enforced exclusively through private civil actions rather than by the state, much like the 2021 Texas Heartbeat Act, which prevented abortion providers from suing the state over the law’s constitutionality because the state didn’t actually enforce the law.

The Supreme Court precedent in Roe v. Wade blocks most abortion restrictions throughout the first six months of pregnancy, but a leaked draft opinion revealed the justices would likely overturn Roe in this term, allowing states to determine their own abortion laws as they did before 1973.