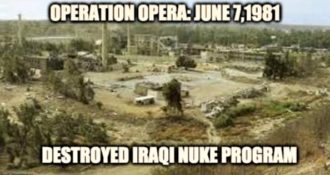 In the late 1970s, Iraq purchased an “Osiris class” nuclear reactor from France (some things never change). Israeli military intelligence assumed this was for the purpose of plutonium production to further an Iraqi nuclear weapons program. Israeli intelligence also believed that the summer of 1981 would be the last chance to destroy the reactor without exposing the Iraqi civilian population to nuclear fallout. After that point, the reactor would be loaded with nuclear fuel.

Just like Iran today, Iraq protested that its interest in nuclear energy was peaceful, at the time Iraq was a signatory to the Nuclear Non-Proliferation Treaty (NPT), placing its reactors under International Atomic Energy Agency (IAEA) safeguards. Some experts remained unconvinced that the IAEA monitoring program was sufficient to guarantee that weapon research was not being conducted. They also claimed that an Osiris class reactor was not particularly useful to countries which have no established reactor programs, but that it was capable of producing plutonium.

Israel first pursued a diplomatic solution to the situation. The villain of the Temple Mount and Israel’s foreign minister Moshe Dayan went to the United States for help. However, Israel failed to obtain assurances that the reactor program would be halted. In meetings with the Defense Secretary Casper Weinberger and Secretary of State Alexander Haig, there was agreement about the Israeli assessment regarding the Iraqi nuclear threat. American representatives even verified Israeli assessments that Iraq was working to reach nuclear capability and would exploit the ability to influence and destroy Israel. Despite the American consensus, the Americans refused to act, perhaps because they did not truly grasp the danger, or because they did not want to upset Iraq, then fighting America’s enemy, Iran.

Yitzchak Shamir, negotiated with French presidents Valery Giscard-D’Estaing and his successor François Mitterand. The French proved intransigent, looking out for their own economic interests as Iraq was by far their top customer for military hardware. The payments to France came mostly in the form of oil.  [Then as now the French Government couldn’t give a rat’s arse about dead Jews]

According to Shamir, French Minister for Foreign Affairs Claude Cheysson told him that there were only two major Arab powers: Iraq and the PLO. Despite Shamir’s personal affinity toward the French, as they had sheltered him while he was a member of the pre-state uprising against the British occupation of Israel, he was extremely disappointed when he realized that France was unwilling to cooperate and prevent Saddam Hussein’s Iraq from becoming a nuclear state, despite urgent and emotional pleas by the Israelis that Iraq was preparing a nuclear holocaust against Israel and the Jewish people. (source Yitzhak Shamir, “The Failure of Diplomacy,” Israel’s Strike Against the Iraqi Nuclear Reactor 7 June, 1981, Jerusalem: Menachem Begin Heritage Center: 2003, 13-14.)

Just like today with Iran there were political considerations, but this time the politics were in Israel:

According to Moshe Nissim, it was the need to contend with the danger of an atom bomb in the hands of a dangerous and irresponsible Arab ruler who would not hesitate to use it against Israel that convinced Begin of the urgency and necessity to destroy the Iraqi reactor. In addition, Begin knew the Likud had a chance of losing the upcoming elections. If Labor, led by Shimon Peres, came into power, Begin feared the plans to prevent Iraq from obtaining a nuclear arsenal would be shelved. Begin, however, was not about to let Israel’s security be weakened due to election consideration (Moshe Nissim, “Leadership and Daring in the Destruction of the Israeli Reactor,” Israel’s Strike Against the Iraqi Nuclear Reactor 7 June, 1981, Jerusalem: Menachem Begin Heritage Center: 2003, 21)

As the IDF reported it…

Read the Rest of the Story at the Lid…