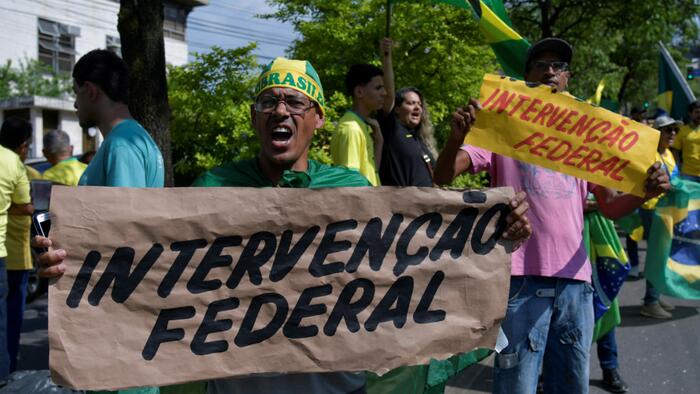 Brazil’s outgoing President Jair Bolsonaro in the clearest evidence thus far that he intends to oversee a peaceful transition of power after “Lula” da Silva’s election win has urged his supporters to “unblock the roads” as mass demonstrations continue.

On Wednesday chants across pro-Bolsonaro gatherings could be heard calling for military intervention, as they are calling the integrity of the election into question. These rallies over the past couple days have began growing in front of military installations. The huge size and extent of the protests have many political leaders concerned over the possibility of instability before Lula takes office on January 1st.

AFP reporters have heard chants of “Federal intervention now!” among thousands gathered in front of the Southeastern Military Command in Sao Paulo.

Bolsonaro addressed the unrest in a Wednesday speech, as frustration grows over lengthening traffic jams and supply chain problems outside of Brazil’s largest cities:

“I want to make an appeal to them: Unblock the roads,” Bolsonaro said late Wednesday. The blockages do “not seem to me to be part of legitimate demonstrations.”

“Other demonstrations that are taking place throughout Brazil in squares… are part of the democratic game. They are welcome,” he added.

Bolsonaro had been silent from Sunday until giving a very brief concession speech on Tuesday, except he neither congratulated Lula nor admitted defeat. However, his chief of staff did confirm there would be a transition to a new government.

But violence has begun to break out, including the below shocking scene on Wednesday in which a man in a speeding car plowed through a crowd of Bolsonaro supporters…

Few official details have been given by Brazilian authorities, even as the footage goes viral. According to one regional report:

Multiple people, including two police officers, were injured on Wednesday after a car drove into a road blockade set up by supporters of President Bolsonaro.

It is not clear what the motives of the driver were, who was seemingly brought to a stop by police at gunpoint.

A 28-year-old man has been arrested on suspicion of attempted murder.

No one was reported killed at the scene, however there may have been over a dozen injuries, with at least two people hospitalized with serious injuries, local reports say.

Protesters say they are coming under attack by far-Left agitators and Lula supporters. Into Thursday, there are reports that the demonstrations and road blockages have begun to disperse in some areas, however, photographs and footage from major cities continue to reveal very large groups in central squares.

Brazilian patriots besiege the military command in Rio de Janeiro. They ask the military leaders to arrest Lula: “We will not allow a corrupt criminal to rule us!” Mass protests across Brazil. pic.twitter.com/z5DSVbOFhI

The rhetoric has also grown fiercer from both sides, especially as the pro-Bolsonaro protests call on the military to “arrest” future president Lula.