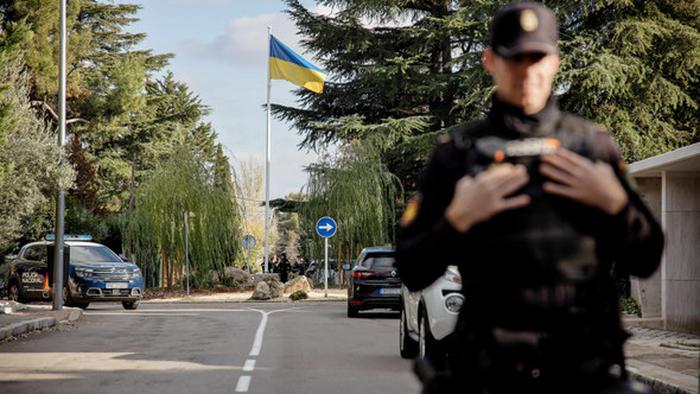 Ukraine says its embassies across Europe are coming under attack with a “well-planned campaign of terror” – following last week’s embassy mail bomb incident at the embassy in Madrid, Spain – which injured a worker.

Over the past several days more than a dozen letters containing either explosives or bloody animal parts have been received by Ukrainian embassies or in some cases intercepted before they arrived.

“There have been 17 cases of embassies receiving either letter bombs, false bomb letters, or letters containing animals parts, like the eyes of cows and pigs,” CNN cited Ukrainian Foreign Minister Dmytro Kuleba as saying.

The animal eyes are being interpreted as threats of more violence to come targeting Ukrainian diplomatic outposts in the West. In some cases the ambassadors in residence have had their names written on the envelopes. “This campaign is aimed at sowing fear,” Kuleba said.

Though there’s as yet no publicly disclosed evidence presented by authorities as to who is behind the series of letters and mail bombs, Kuleba pointed the finger directly at Moscow in his latest statement, saying, “Maybe this terror response is the Russian answer to the diplomatic horror that we created for Russia on the international arena, and this is how they try to fight back while they are losing the real diplomatic battles one after another.”

So far, “bloody” and threatening packages have been sent to embassies and general consulates in Hungary, Poland, Croatia, Italy, the Czech Republic, and Austria. Vowing not to be intimidated, Kuleba said further, “We have grounds to believe that a well-planned campaign of terror and intimidation of Ukrainian embassies and consulates is underway.”

Several Ukrainian embassies around the world have been sent “bloody packages” containing animal eyes. Among them, reports Sky News, is the embassy in Croatia.https://t.co/ozcIZePDA4

“We will continue to work effectively for the victory of Ukraine,” he stressed, while also urging foreign governments in Europe to step up round-the-clock protection of its missions in their countries, including security of diplomatic personnel.

Spain especially is on high alert after a mail bomb was days ago even sent to the US Embassy in Madrid. It was reportedly intercepted before it arrived.