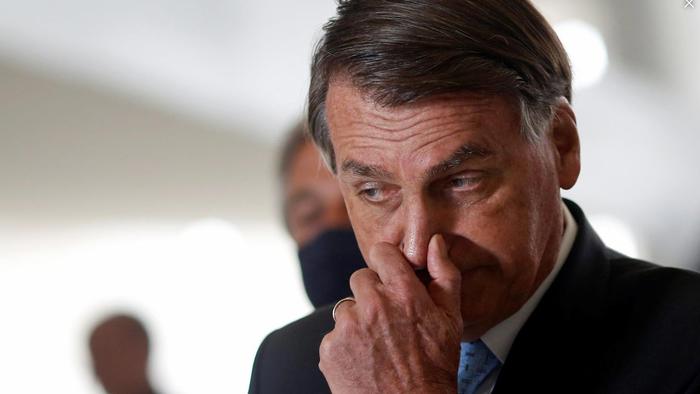 Chaos erupted in Brazil over the weekend following Friday’s shock decision by president Bolsonaro to appoint Joaquim Silva e Luna, a retired army general and former defense minister overseeing the state-run Itaipu hydroelectric dam on the border with Paraguay and Argentina since 2019, to be the next chief executive of Petróleo Brasileiro SA, aka Petrobras. Bolsonaro’s decision on Friday to replace Roberto Castello Branco, the University of Chicago-educated economist at the helm of Petrobras, who suffered withering criticism for ignoring the complaints of truckers as he hiked diesel prices 15% this week, surprised even his inner political circle.

As Bloomberg reports, there was no room to discuss the move “that shows a president increasingly impatient with the government’s inability to appease his political base, including truckers who have been threatening a strike over rising diesel costs.”

The following day, the president justified his decision by saying the oil company’s current management has shown “zero commitment to Brazil.” Without elaborating, he added that he’s preparing to replace other parts of his administration that “may not be working,” including in the nation’s power sector. On Monday, he told supporters in front of the residential palace that he’s not interfering in the company, but rather demanding “predictability and transparency” from it.

Roberto Castello Branco, Petrobras’s CEO officer, had won investor praise by reducing the company’s debt and advocating its independence from the government. All that is set to change with the appointment of General Joaquim Silva e Luna, whose nomination needs to be approved by the state-controlled company board, and whose experience is limited to say the least: he has been in charge of the Itaipu hydroelectric dam for the past two years, and served as a defense minister in the previous administration.

“It’s certainly an indication policy could be headed in the wrong direction,” said Brendan McKenna, a currency strategist at Wells Fargo in New York.

Indeed, Bolsonaro’s stunning decision rattled confidence in local risk assets and triggered a cascade of selling in Brazil linked assets: the real fell 2.2% at open, breaching the key 5.5 per dollar level that had been serving as support for the currency. Petrobras’s shares plunged over 20% as analysts from Credit Suisse to JPMorgan cut their recommendations for the stock over the weekend.

The transition threatens to undermine investor confidence in Latin America’s largest economy at a time its recovery falters amid a second wave of Covid-19. With his popularity dropping to near record lows after a program of cash handouts to the poor expired in December, the president looks increasingly eager to please his political base to the detriment of the austerity agenda of Economy Minister Paulo Guedes.

According to Reuters, Bolsonaro’s approval rating slumped to 32.9% in February, from 41.2% in October, a poll by transport confederation CNT disclosed on Monday. The poll was conducted between Thursday and Saturday last week and would thus partially include reaction to Bolsonaro’s Friday decision to install a retired general with no oil and gas experience as chief executive of state oil company Petroleo Brasileiro SA.

As Bloomberg adds, Guedes has kept silent since Bolsonaro’s announcement on Petrobras because there’s nothing he can say about the decision to make it look better, according to three government officials close to him, although “he’ll try to minimize investor concerns about political intervention by speeding up the approval of austerity measures in congress, the people said, asking for anonymity because the discussions aren’t public.”

Guedes has spent the past few days negotiating with lawmakers on the approval of a constitutional amendment that would make room for the government to provide another round of Covid aid to poor Brazilians in exchange for cuts in public spending in coming years. The bill will ensure fiscal credibility and predictability, and talks are going well as there’s an understanding that the country has no time to waste, the people said.

Despite losing several political battles recently, Guedes doesn’t intend to step down before leaving an economic legacy he can be proud of, the people added.

“That reminds us of other moments of government meddling in economic policy,” said Caio Megale, chief economist at XP Investimentos, recalling a 2013 decision by former President Dilma Rousseff to reduce electricity prices. “The market wants to know if the president’s decision is a new guideline for economic policy.”

Adding insult to risk asset injury, economists surveyed by the central bank lifted their 2021 inflation forecasts above target and also raised their year-end interest rate estimate for the second straight week. Meanwhile, they cut their 2021 economic growth forecast for the third straight week, hinting at a painful stagflationary episode.

James Gulbrandsen, chief investment officer for Latin America at NCH Capital, which has about $3 billion in assets under management, said the uncertainty leaves Brazil at risk of being shunned by investors.

“If Bolsonaro interferes with electricity pricing, it’s probably game over for his ability to attract foreign capital,” he said.

And judging by the collapse in Brazilian risk assets, foreign capital is already well on its way out.