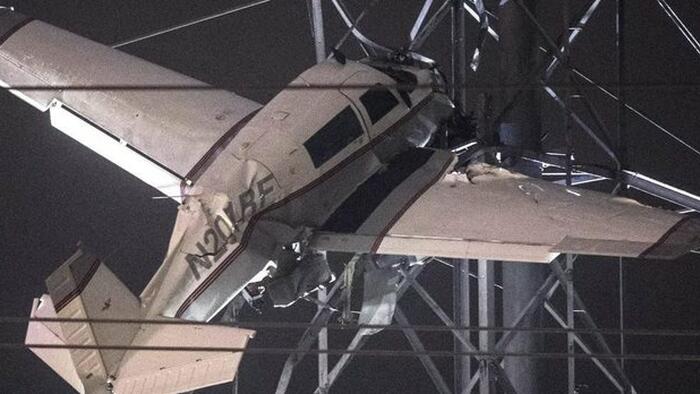 The pilot and passenger, identified as Patrick Merkle, 65, of Washington, and Jan Williams, 66, of Louisiana, are reportedly alive and unharmed in the aircraft, and authorities are in cell phone contact with them according to Montgomery County Fire Chief Scott Goldstein.

Rescue personnel have had to wait until crews can ground the lines before attempting to extract the plane, with Goldstein saying that crews would need to go up the lines themselves in order to put clamps or cables onto the wires to ensure there is no static electricity or residual power that could pose danger to any involved, according to DC News Now.

Authorities say they are in communication with the two people stuck in a plane that hit a power transmission tower in Gaithersburg. Tap here for more: https://t.co/jjq2Wdqlnn . pic.twitter.com/cE7CGcccDR

Bascially: Crews have to go up to the wires and ground them. then secure plane to the tower. Large crane about to arrive. They’re awaiting additional resources arriving around 9:30. the occupants in airplane are okay.

The power outage is limiting the number of patients that two nearby hospitals  can take, according to the report.