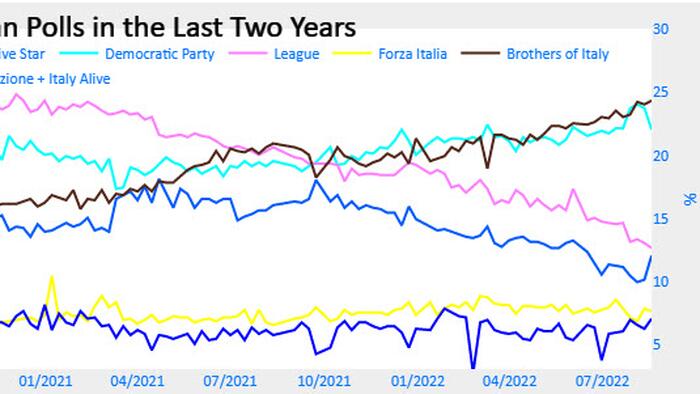 The FTSE MIB fell 2% on Friday, compared to 0.8% for the Stoxx 600, and continues lagging the benchmark today. The country’s right-wing coalition led by Giorgia Meloni’s Brothers of Italy party is nearing a landmark level of support.

A strong election result by Meloni’s bloc could see it garner enough votes in parliament to reach a two-thirds majority. That could allow the right to push through changes to the constitution, possibly including enhanced powers for the prime minister’s office or direct election of the country’s president. Italian bonds also fell for four days.

Italian stocks are faring slightly better than the Stoxx 600 this month but the FTSE MIB is the worst-performing major Western European benchmark year-to-date. Economic and energy crises and fragmentation headwinds have buffeted the stocks. Political chaos has contributed to the underperformance, with Mario Draghi’s resignation spurring a snap election next month.

Banks are the biggest industry in the FTSE MIB at almost 20% and a gauge of Italian lenders has lagged the FTSE MIB and Stoxx 600 Banks index last week and so far this year. Banks are tied to the moves in BTPs and a symbol of political risk. Earlier this month Bloomberg Intelligence noted the FTSE MIB’s “fundamental resilience” faces greater geopolitical uncertainty — on a widening BTP-Bund spread and potential European economic slowdown.

Italian 12-month forward EPS growth has slightly outperformed the Stoxx 600 so far this year, and the gauge remains cheap historically on an absolute basis and compared to the Stoxx 600. But that’s not enough to garner sufficient investor interest. Italian and German stocks remained the least preferred in the most recent Bank of America European fund manager survey.