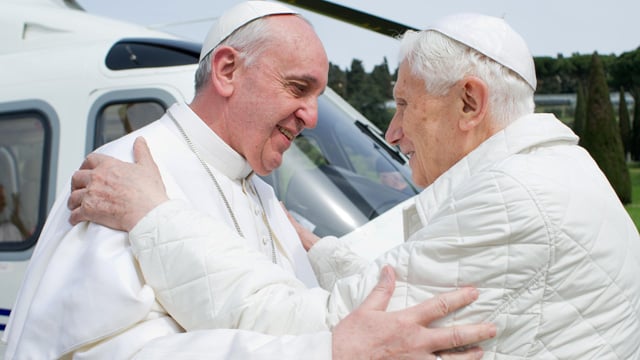 As a former Roman Catholic who has rediscovered the Hebrew roots of Christian faith, and how this perspective profoundly enriches the Reformers’ doctrines of “the priesthood of all believers” and the absolute supremacy of Scripture over church traditions, I have serious differences with many aspects of Catholicism, but I nevertheless recognize that a great many Catholics are authentic, even exemplary Christians by biblical standards. (If, as I believe, salvation truly is by faith alone in Christ alone, whatever other things one believes in – even false doctrines and rituals – are merely sanctification issues that do not affect one’s justification: important but not spiritually fatal.)

One such exemplary Christian is the recently deceased Joseph Ratzinger whose final service to Christendom was in the role of Pope Benedict (Emeritus). His “Letter to the Bishops of the Catholic Church on the Pastoral Care of Homosexual Persons,” published in October of 1986 when he was “Joseph Cardinal Ratzinger, Prefect of the Congregation for the Doctrine of the Faith,” is in my view the gold standard of guidance for Christians in approaching the issue of homosexual sin in the church. Importantly, his letter was not a set of mere suggestion to the Bishops but a controlling doctrinal mandate, issued just six months after the Catholic-dominated U.S. Supreme Court issued its landmark ruling in Bowers v. Hardwick (forcefully rejecting the decades-long effort to make homosexual sodomy a civil right) – these two documents representing an attempt to establish a global bulwark against the already massive and growing LGBT assault on Judeo-Christian civilization being masterminded by principalities and powers in the United States.

Recently, Catholic writer and editor Rod Dreher of The American Conservative published a stunning article titled “Benedict XVI: It is The Time of Antichrist,” sub-titled “In 2015, BXVI wrote letter to Catholic statesman Vladimir Palko, urging prayer against the ‘expanding power of the Antichrist.'” The short missive was a note of appreciation for Palko’s book “The Lions Are Coming: Why Europe And America Are Heading for a New Tyranny” (not available in English). Palko’s personal embargo of the letter ended with the Benedict’s death, and Dreher is apparently the first to reveal its contents, the essence of which is just one sentence long:

“As one sees the power of Antichrist spreading, one can only pray that the Lord will give us mighty shepherds to defend His Church against the power of evil in this hour of need.”

In 2015 when this letter was written, Benedict had been in seclusion/captivity in Vatican City for over a year after what I and many Catholic leaders and lay-persons believe was a forced abdication orchestrated by Barack Obama to install his ideological ally Jesuit Cardinal Jorge Mario Bergoglio of Argentina (who became Pope Francis in March of 2013). My detailed arguments supporting this conclusion are published here:

One especially significantly fact is that this Vatican coup occurred shortly after a report Pope Benedict had commissioned finally confirmed the existence of a powerful “gay mafia” in the Vatican (an open secret that had been publicly hinted at by his predecessor Pope John Paul).

I have been unapologetic in stating I believe Barack Obama is both a homosexual and (still) a prime candidate for the Antichrist, and that I believe the widespread societal embrace of so-called “gay pride” will be the issue that triggers the wrath of God against the world under the reign of the Antichrist. I believe Obama is the puppeteer controlling Joe Biden and is thus the choreographer of today’s expanding geopolitical chaos. And we must never forget that it was the tag-team of Obama and Pope Francis that launched the current globalist blueprint for one-world government, the “2030 Agenda for Sustainable Development” at the United Nations in 2015.

Following a private meeting with Obama on Sept. 23 of that year, Francis gave an unprecedented address to Congress the next day (gushingly reported), and then on the 25th officially launched the “2030 Agenda” with a speech to the U.N. General Assembly. It is in the context of these events, whose Vatican City preparations began long before Francis’ trip to the U.S., that Pope Benedict penned his Antichrist warning.

Brother Dreher may or may not hold these conclusions, but his article implicitly bolsters them. He writes, “Benedict wrote about the Antichrist in his first book about Jesus of Nazareth. It was the part where he discussed the temptation of Christ by the devil in the desert, where ‘the devil appeared as a theologian,’ in Ratzinger’s words. The Pope also recalled Solovyov’s famous Legend of the Antichrist, which is a short fictional prose where the Antichrist … appears … as a great humanist, he fights against hunger. … Benedict uses this only as an illustration that even ‘interpretation of the Scriptures can become a tool of the Antichrist.’ … And he reminded that the Antichrist does not have to look hideous, that he does not have to be recognized as evil, but he can appear acceptable, benevolent, as a humanist.”

These are not casually chosen words by the pope emeritus, which I take to mean he may have shared my opinion that the religion of the Antichrist is not reflected in some crude and obviously demonic institution like the clownish and conservative-punking LGBT culture-war instrument they call the “Temple of Satan,” but is in fact Secular Humanism – the perfection of Satanic delusion in beguiling doctrinal form whose deity is man himself (a la the serpent’s prophecy in Genesis 3:1-5 and God’s counter-action in Genesis 3:22-24) and whose mind-enslaved adherents deny its beliefs are religious.

Dreher ends his article by drawing special attention to the man I believe may be the actual False Prophet of Revelation, the “married” homosexual transhumanist and World Economic Forum philosopher-in-residence, Yuval Noah Harari. Interestingly, I went public with that hypothesis in a WND column titled “Is this transhumanism guru the false prophet of revelation?” in which I tied together the three key elements of this current piece: the centrality of LGBT themes to the Antichrist agenda, the contention that Secular Humanism is the perfection of Satanic religion in the last days, and the starring role of transhumanism in the final insurrection against Judeo-Christian civilization, triggering the second coming of Christ.

I am thus taking Dreher’s illuminating report on Pope Benedict’s perspective of the Antichrist as Holy Spirit confirmation of my conclusions (whether or not he would agree with them), and urging my fellow remnant Christians of all confessions to ponder how this departure from/refinement of traditional eschatology might influence our individual and collective response to current events.