Pope Doubles Down On NATO-Ukraine Comments: Russian Invasion Was “Provoked” 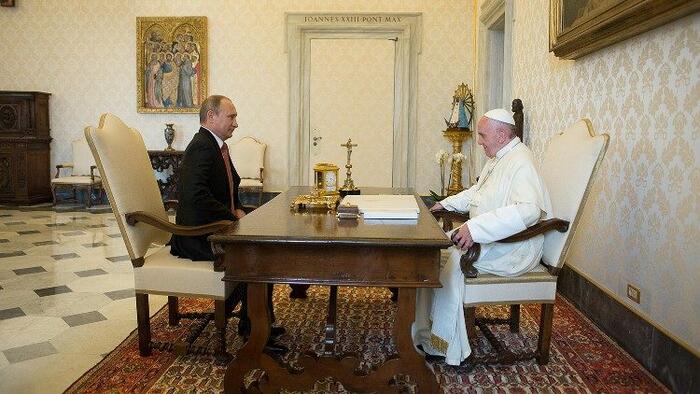 Pope Francis has doubled down on prior controversial statements suggesting the Russia-Ukraine conflict is largely NATO’s fault, asserting also that “war cannot be reduced to distinction between good guys and bad guys” – as the Vatican’s own headline to the interview reads.

In statements published Tuesday by the Jesuit magazine La Civiltà Cattolica, the Roman Catholic leaders said that the Russian invasion was “perhaps somehow provoked” while again saying there were signs that NATO had been “barking at the gates of Russia” in the run-up.

The pontiff still condemned what he called the “ferocity and cruelty of the Russian troops” while warning against a pure ‘good vs. evil’ fairytale narrative of the conflict.

Just like with his initial similar comments made at the start of May, these latest statements have triggered outrage among Western pundits who’ve called for escalating military support to Ukraine at the expense of dialogue with Moscow toward negotiating a settlement to end the war:

That’s when in the interview he provided more context to his early May statements on the war. He said that a couple months prior to the Feb.24 invasion, he met with a “wise” head of state – though Francis didn’t name him or her:

“…a wise man who speaks little, a very wise man indeed … He told me that he was very worried about how Nato was moving. I asked him why, and he replied: ‘They are barking at the gates of Russia. They don’t understand that the Russians are imperial and can’t have any foreign power getting close to them.'”

“He concluded, ‘The situation could lead to war.’ This was his opinion. On 24 February, the war began. That head of state was able to read the signs of what was happening.”

He added: “We do not see the whole drama unfolding behind this war, which was, perhaps, somehow either provoked or not prevented.”

The Pope also reiterated that the arms industry in the West is benefitting from the bloodshed: “I also note the interest in testing and selling weapons. It is very sad, but at the end of the day that is what is at stake,” he said in the interview.

“Someone may say to me at this point: but you are pro-Putin! No, I am not. It would be simplistic and erroneous to say such a thing. I am simply against turning a complex situation into a distinction between good guys and bad guys, without considering the roots and self-interests, which are very complex. While we witness the ferocity and cruelty of Russian troops, we should not forget the problems, and seek to solve them,” he explained.

According to Vatican News, the pontiff additionally described that even beyond Ukraine-Russian, “the world is at war…

“We see what is happening now in Ukraine in a certain way because it is closer to us and pricks our sensibilities more. But there are other countries far away—think of some parts of Africa, northern Nigeria, northern Congo—where war is ongoing and nobody cares. Think of Myanmar and the Rohingya. The world is at war. Today, for me, World War III has been declared.”

The last time he suggested the West is at least equally to blame for the unfolding Ukraine war, an avalanche of op-eds and condemnations were issued by US and Western officials suggesting that somehow liberal Pope Francis too has been ‘compromised’ by Putin (ironically a smear typically reserved for Trump or Republicans in general).