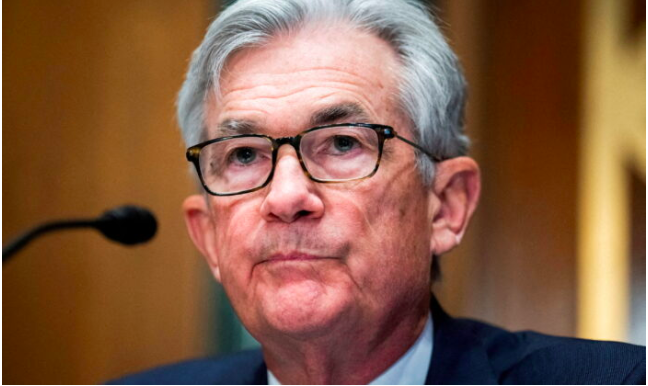 Federal Reserve Chair Jerome Powell said Thursday that persistent supply chain disruptions and “huge” geopolitical events happening around the globe could foil the Fed’s attempts at engineering a so-called “soft landing” for the U.S. economy, with the central bank chief’s statement amounting to an acknowledgment of the possibility of a recession.

Powell made the remarks in an interview on NPR’s “Marketplace,” in which he was asked whether he’s more concerned about the prospect of high inflation sticking around or the notion that the Fed’s monetary tightening response to surging prices could spark a recession.

“It’s a very challenging environment to make monetary policy,” Powell replied. “Our goal, of course, is to get inflation back down to 2 percent without having the economy go into recession, or, to put it this way, with the labor market remaining fairly strong.”

Calling price stability the “bedrock” on which the economy rests, Powell insisted that the Fed’s key objective is to tame runaway prices, saying that “nothing in the economy works” unless inflation is reined in.

‘Prepared to Do More’

Powell reiterated his expectation that the Fed would tighten monetary settings by hiking rates by 50-basis-point increments over the next two meetings but added that the central bank is prepared to act more aggressively if conditions warrant.

“We have a series of expectations about the economy. If things come in better than we expect, then we’re prepared to do less. If they come in worse than when we expect, then we’re prepared to do more,” Powell said, prompting a question about whether the Fed would consider a 75-basis-point hike, which he declined to do, saying only that policymakers would “adapt to the incoming data and the evolving outlook.”

Powell was then asked about a pathway to “this mythical soft landing,” where the policy tightening doesn’t tip the economy into a recession.

“It will be challenging, it won’t be easy,” Powell replied, admitting that it “would have been better” to have started raising rates earlier than in March.

Addressing challenges, the Fed chief said that monetary policy can cool surging demand, which is part of the inflationary puzzle, but that the central bank has no tools to address supply-side factors.

“Supply is a big part of the story, here. But more than that, there are huge events, geopolitical events going on around the world, that are going to play a very important role in the economy in the next year or so,” Powell said.

“So the question whether we can execute a soft landing or not, it may actually depend on factors that we don’t control. But we should control the controllable. And what we control is there’s a job to do on demand, demand is out of whack with supply.”

Powell said that Fed policymakers would try to “moderate demand in a way that lets the labor market get back in balance and help inflation get back to 2 percent.”

The post-pandemic economic recovery, coupled with “Great Resignation” dynamics, has led to a situation where job openings have surged to a record high, as has the number of people quitting. There are now around two job openings for every unemployed person, putting upward pressure on wages as businesses struggle to attract and retain workers.

“Wages are moving up at levels that are unsustainably high and not consistent with low inflation. And so what we need to do is we need to get demand down, give supply a chance to recover and get those to align,” Powell said.

Asked to summarize in no more than five words his key concern, Powell said, “get inflation back under control.”

Inflation as reflected in the headline Consumer Price Index (CPI) data showed prices climbing at a slightly slower 8.3 percent over-the-year pace in April compared to an 8.5 percent pace in March, prompting some analysts to suggest that peak inflation has arrived and the pace of price growth would start to fall. Others are not so sure.

Bankrate Chief Financial Analyst Greg McBride told The Epoch Times in an emailed statement that he sees inflation as having become more broad-based, while cautioning against interpreting the decline in headline CPI data as meaning that inflation has peaked.

“The pace of price increases moderated, but not as much as expected. Excluding a decline in energy prices—which appears outdated by this point—the increases remain widespread,” McBride said. “With the annual rate ticking down from 8.5 percent to 8.3 percent, it can be tempting to say we’ve seen the peak, but we’ve also been head-faked before as was the case last August.”

Core inflation, which strips out the volatile categories of food and energy and is viewed by economists as a more accurate measure of underlying inflationary pressures, picked up its pace in April.

Both on a year-over-year and on a month-over-month basis last month, core inflation accelerated to 6.2 percent and 0.6 percent, respectively. The monthly core inflation reading, in particular, was twice as high as the 0.3 percent pace notched in March, suggesting inflationary pressures may not have peaked.

Allianz chief economic adviser Mohamed El-Erian warned in a recent interview that the inflation problem in the United States would invariably morph into a cost-of-living crisis as price pressures broaden into more categories, further eroding the wage gains of many American households and denting demand.

Nominal wages, which are not adjusted for inflation, climbed by 5.5 percent in the year through April, but the faster 8.3-percent pace of consumer price growth means that inflation-adjusted real wages actually declined 2.8 percent.

In an interview on CNBC’s “Squawk Box” on May 11, El-Erian was asked about real wages declining in April and what the implications are for the economy of inflation outpacing wage gains and making products less affordable to American households.

“That’s when an inflation problem becomes also a growth problem. Why? Affordability. The extent to which high prices destroy demand,” the economist replied.

“It’s just a matter of time until we talk about a cost-of-living crisis—and this is what it is,” he insisted.