Power To The People… Just Not Yet 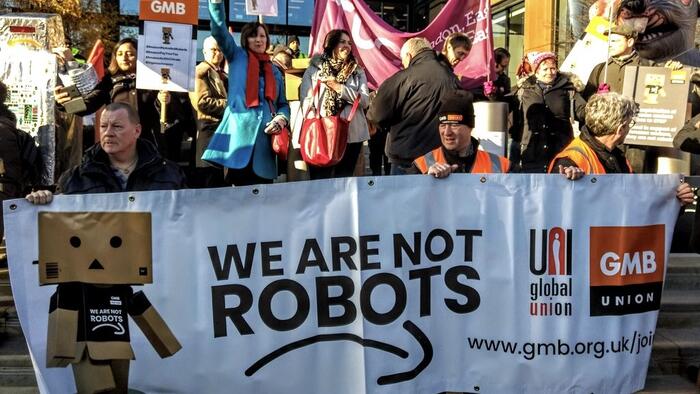 Inflation at multi-decade highs in many developed economies has made the politics of inflation highly contentious. Who is to blame? What can be done? Who shoulders the burden? Let’s have a closer look at the United Kingdom, a country at the forefront of this struggle.

Financial markets, policy makers, and the business community in general often express concerns about inflation through stories about tight labour markets, highlighting the large number of unfilled vacancies compared to unemployed individuals looking for work, recruitment difficulties, and high churn rates. In the UK, the US, and even in the Eurozone, the labor market is generally described as too tight. This means that there is a concern that everyday workers have too many options, that it will be difficult to reverse nominal wage pressures, and that levers need to be pulled to break the cycle.

This is all based on the long-standing, but recently resuscitated, theory that you’ve got to reduce worker security if you want to fight inflation. The ‘Phillips curve’ is a more polite or technocratic way of saying that “we, the ruling class, need to have you, the working class, making less money and having fewer employment options, so that we can secure the value of *our* claims on *your* future work”. Central bank efforts to reduce demand in the face of a series of supply shocks is a reflection of this agenda – one that sees higher unemployment as an explicit aid in disciplining the workforce, even before real wages and living standards have had a chance to recover.

Inflation is a complex phenomenon influenced by economic, political, and social factors, making it difficult to forecast with any precision. Economists have aptly shown this. However, the big picture is that inflation is about the balance of power between those who set prices and those who take prices. The wage, which is the price workers set to perform jobs for businesses, is just one part of the inflation equation. The benign view of this narrow policy focus on wages as a driver of inflation is that the labor market is simply one of the easier levers to pull. A more confrontational view is that there is no real desire to look for other levers. Since monetary policy is now being used explicitly to reduce demand, the central bank finds itself on one side of the current class struggle. (Oh, sweet irony.)

That leaves us with a paradox. If we accept that Keynes’ ideas on demand management have some validity and that changes in monetary-fiscal policy settings can create booms or engineer busts, why would corporations want avoidable recessions, if these damage the short-term bottom line? In comes Kalecki, the Polish economist who posited that when policy makers set policy for a booming economy with high job security, strong wages and low unemployment, they also choose to transfer power from corporations to regular workers. His prediction was, therefore, that corporations would hate the idea of a continuously ‘hot’ economy, simply because it undermines their own power in society. Consequently, they are lobbying to prevent that, and off we go, from boom to bust to boom. Of course, Schumpeterians challenge Kalecki that this process of ‘creative destruction’ is actually what brings us more progress in the long term!

Other than the implicit threat to quit and take a job elsewhere, workers have a second source of power: unionization and (coordinated) strike action. In the 19th and early 20th century, unions played a major role in the fight for better working conditions, higher wages, and other labour rights. In 1926, the United Kingdom had its first and last general strike, when 1.5 million workers in the coal, rail, and transport industries withheld their labor for nine days. Almost a century later, hundreds of thousands of postal and rail workers, NHS staff and civil servants could again be on the picket lines. The UK now faces a winter of strikes, with potentially millions of working days lost in the months ahead.

Success of coordinated strike action in the 21st century is far from guaranteed. A series of changes to the country’s trade union laws in the 1980s and 1990s were aimed at reducing the power of trade unions, making it harder for them to disrupt the economy through industrial action. Even though there appears widespread support from the general public, factors such as globalization, labor market liberalization, technological changes and a decline in unionization have made the workforce much more atomized and diverse.

Earlier this year, Bank of England Governor Bailey already told workers they should not ask for a big pay raise. This week, Conservative party chairman Zahawi suggested that nurses should drop pay demands in order to ‘send a message to Mr Putin’ and hinted the government might use the military as de facto strikebreakers. Meanwhile prime minister Sunak is under pressure from his MPs to accelerate new anti-strike laws. The class struggle will only deepen once the effects of the recession kick in.

The government’s claim that it lacks the funds to increase public sector pay to compensate for lost purchasing power is based on a flawed understanding of economics and uses the recent budget failure as a convenient excuse. It could fund the pay increases through higher taxes elsewhere, such as on wealth or non-productive assets if it desired so. Alternatively, it could choose to pay workers more but have a smaller workforce. It could even temporarily borrow more and accept the potential inflationary impact. Instead, it aims to squeeze public sector workers, trying to get more work done for less, or else hope (in vain!) to politically benefit from the societal conflicts the ongoing strikes will cause.

The next couple of months are therefore going to be crucial for GBP interest rates. If public sector workers are able to secure significant pay increases that make up for the past decade of stagnant wages, higher wage growth could sustain higher (core) inflation readings for an extended period of time. In that case, the Bank of England may need to raise rates well beyond the 3.50% to 4.00% level it signalled in last month’s press conference. On the other hand, if the recession hits hard and fast, as the central bank warns, a weaker labor market and increased job insecurity will keep pay, wages, and rates in check.