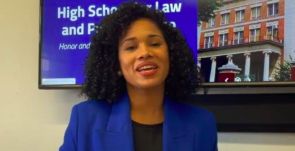 Karma has boomeranged on a left-wing New York City principal who allegedly plotted to get rid of white teachers because, according to her colleagues, she “definitely has something against white people.”

Now, her job is on the line.

Paula Lev, who’s Dominican, is the principal of the High School for Law and Public Service in Washington Heights — a neighborhood that’s 67.9 percent Hispanic.

She’s under investigation for allegedly trying to divide employees by race and attempting to conspire with other teachers to oust white faculty members, the New York Post reported Saturday.

Amid Lev’s apparent anti-white hostility, a whopping 83 percent of her racially diverse staff voted that “they no longer have confidence” in her ability to lead their school.

The stunning revelations were uncovered in a damning complaint filed last week with the Department of Education’s Office of Equal Opportunity.

The complaint was signed by most of the faculty at Lev’s school, which is comprised of black, Hispanic, Asian, Jewish and white teachers.

The staff members accused Lev of being a vindictive bigot who “flagrantly but unsuccessfully attempted to divide our school by race.”

“She definitely has something against white people,” said the complaint, which was reviewed by the Post.

“As a school staff, we have lost confidence, creditability, trust, and most importantly, we have lost hope in Ms. Lev as a principal at the High School for Law & Public Service.”

One minority teacher alleged that in June, Lev tried to rope him into participating in a shady plot to oust an unidentified white female staffer.

“Ms. Lev has asked me to conspire with her on a couple of occasions in getting rid of my colleague,” the faculty member said in the Department of Education filing.

“She also stated to me in Spanish that she was ‘going to get rid of all these white teachers that aren’t doing anything for the kids of our community,’” the complaint said.

“I believe Ms. Lev is not suited for the position of principal because of the comments she has made to me about white people and the malicious ways in which she thinks and speaks. She is not fit to be a leader of a school.”

A week after that teacher blew the whistle on Lev, she informed him that he was no longer needed at the school and should look for another job.

“He blew the whistle on her and a week later he was excessed,” a colleague told the Post.

Faculty members said they started noticing Lev’s abusive weaponization of the race card in February when Nick Bacon — a white teacher and the leader of a local teachers union — filed a routine grievance about a labor issue that would have negatively impacted much of the staff.

That caused Lev to angrily accuse Bacon of racism in front of six other staffers.

“I wasn’t sure what your problem with me was, maybe it’s because I am a woman of color and you’re a white man?” Lev said to Bacon, according to a March 2 letter to the district’s school superintendent, Manny Ramirez, that was signed by most of the school’s faculty.

The labor issue was eventually resolved in the union’s favor, so Lev halfheartedly tried to smooth things over with Bacon by apologizing to him for publicly accusing him of being a racist.

During her private apology to Bacon, Lev said she was only sorry that she had berated him in public — not that her accusations were baseless and defamatory, according to the Post.

She then castigated Bacon over his so-called white privilege and suggested that he read the inflammatory 2018 book “White Fragility: Why It’s So Hard for White People to Talk About Racism.”

Lev, who earns $165,542 a year as principal, is married to another city school principal, Benjamin Lev of the Hamilton Grange School in Harlem.

In a farcical irony, Paula Lev’s husband appears to be white.

This is a recurring theme among anti-white leftists such as Rep. Ilhan Omar of Minnesota, Vice President Kamala Harris and CNN activist Don Lemon.

They are all married to white people, even as they routinely demonize and scapegoat the white race.

I agree with ⁦@theangiestanton⁩. ⁦@KamalaHarris⁩, @aoc, ⁦@donlemon⁩ and ⁦@IlhanMN⁩ want us to hate ⁦@realDonaldTrump⁩ because he’s white. But it’s ok for them to love white people and have relationships with them. #BS! #Hypocrites #hate pic.twitter.com/qUln5S49mr

This complaint about the left-wing school principal is part of an alarming trend that has normalized anti-white animus.

It’s being rabidly pushed by prominent Democrats and amplified by their media puppets.

While leftists disingenuously claim this dangerous rhetoric promotes racial justice, the only thing it does is stoke race wars — all so Democrats can retain their grip on power indefinitely.