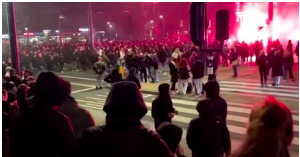 Crowds of several hundred people in Rotterdam set fire to cars and threw rocks and fireworks at police, according to Reuters.

Rotterdam police said on Saturday that 51 people were arrested. Half were under 18.

“Police were forced to draw their weapons and even fire direct shots,” he said at a news conference on Saturday.

Riot police also used water cannons to disperse the crowd, according to the BBC.

Dutch Justice Minister Ferd Grapperhaus said in a statement that the “extreme violence” against law enforcement was “repulsive,” Reuters reported.

“The right to protest is very important in our society but what we saw last night was simply criminal behavior,” Grapperhaus said.

Rotterdam was placed under a state of emergency and its main train station closed due to the rioting, according to the BBC.

Crowds had gathered in the city to protest government plans to limit access to indoor areas to people with a “coronavirus pass” showing that they have been vaccinated, have tested negative or have recovered from COVID-19.

The Netherlands recently imposed a three-week partial lockdown as COVID-19 cases rise in the country to their highest levels since the beginning of the pandemic.

About 70 percent of the Dutch population has been vaccinated, according to Reuters.

The government also banned New Years’ Eve fireworks for the second year in a row to prevent “extra strain on healthcare,” the BBC reported.

Following the violence in Rotterdam on Friday, a planned protest in Amsterdam was canceled. Still, thousands of demonstrators marched in the city in opposition to coronavirus restrictions.

This article appeared originally on The Western Journal.