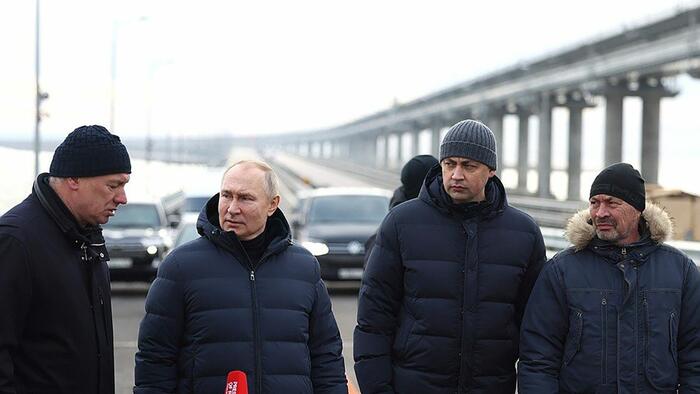 Russia’s President Vladimir Putin took a drive in a Mercedes on Monday, as part of a surprise televised event wherein he traversed the partially destroyed key bridge linking Crimea to the Russian mainland in order to inspect it.

“We’re driving across the right side” of the Kerch Strait Bridge (or also simply called the Crimean Bridge), Putin told Deputy Prime Minister Marat Khusnullin during the tour which brought the Russian leader the closest point he’s ever been to the front lines of ongoing fighting in nearby Ukraine.

Putin on Monday drove across a flagship bridge to occupied Crimea that was seriously damaged in an explosion.

He pulled up to the location of the Oct. 8 blast and got out of the car to order a full repair https://t.co/BHAadu4xOH pic.twitter.com/toyAV9N9Hg

The October 8th blast which ripped apart large chunks of the bridge’s roadway – making an entire set of lanes on one side untraversable (as well as the utter destruction of the rail line portion) – had marked a turning point in the conflict, demonstrating the reach of Ukrainian forces, also resulting in Russian forces unleashing greater and more devastating airstrikes on Ukrainian cities in response.

The Kremlin has since vowed to degrade and destroy Ukraine’s national energy infrastructure just ahead of the frigid winter months. The same day as Putin’s drive, Russia pummeled Ukrainian cities with dozens or possibly over one hundred airstrikes.

During the televised trip across the bridge with Putin at the wheel, he said further, “The left side as far as I understand is in working condition but it needs to be fully restored.” According to a description in Bloomberg:

At one point, Putin pulled up to the location where the Oct. 8 blast took place and got out of the car to discuss repairs to the road and rail span across the Kerch Strait, which he ordered built after annexing Crimea in 2014.

Deputy Prime Minister Khusnullin then updated Putin regarding continued repair work and what is still needed following the “act of terrorism” by Ukrainian forces. It’s believed a truck bomb was responsible, in a likely operation by Ukraine’s intelligence services. Putin in the ceremonial act ordered full repairs of the bridge while standing at the scene.

Khusnullin explained that “metal was available for bridge parts, so the metal was brought over to build these structures, and within two weeks all the 1,214 tons were assembled and brought here.” And Putin asked: “How many people worked on the repairs?” To which Khunsnullin replied that there were “500 people, three floating cranes, four barges and 31 pieces of equipment around the clock.”

Given there’s still a war raging, now after more than 9 months since the initial Feb.24 invasion, it’s very unexpected to say the least that the Russian president would make a trip to a place only very recently targeted in a huge blast. Ukrainian forces have lately showed capability of striking inside Crimea or even mainland Russian territory, making Putin’s in-person tour perhaps dangerous and a bit risky.