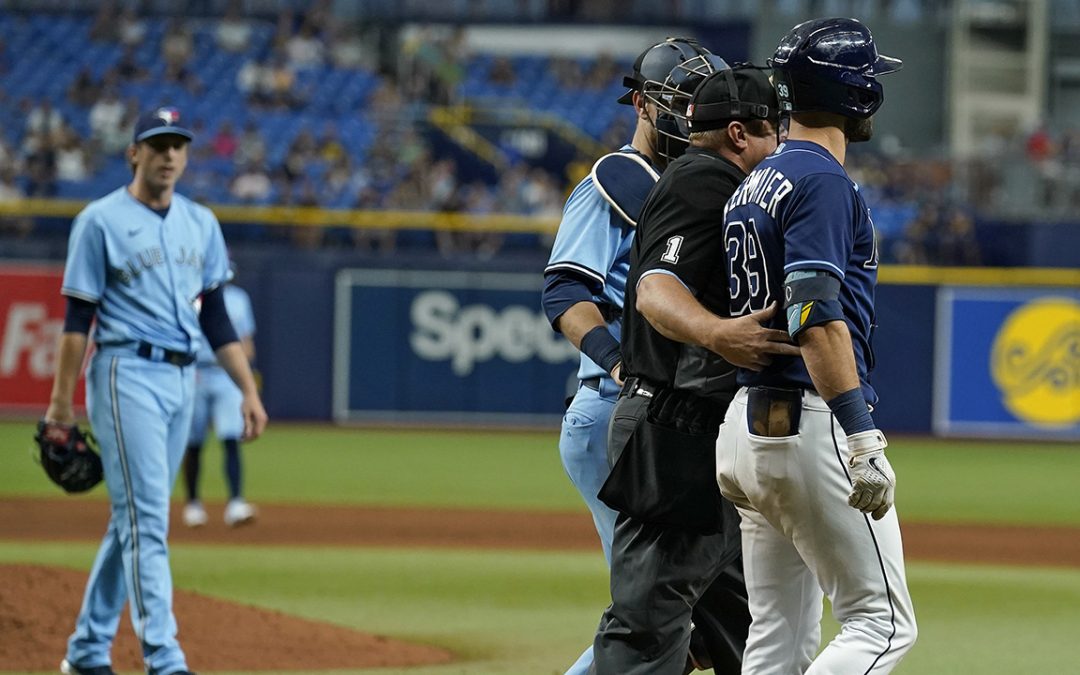 Tampa Bay Rays outfielder Kevin Kiermaier is involved in the most-inside-baseball controversy ever, and on Wednesday night he received the consequence for his action.

On Monday, Kiermaier picked up a scouting card off the ground that apparently came from Toronto Blue Jays catcher Alejandro Kirk during a play at the plate and refused to give it back. Rays manager Kevin Cash apologized to the Blue Jays, and Toronto manager Charlie Montoyo said things were good.

Everything wasn’t all copasetic.

Kiermaier was plunked by Blue Jays pitcher Ryan Borucki in the eighth inning. He believed the bean ball was intentional and said the “motivation is there” for the Rays to play the Blue Jays again.

“Pretty much almost went behind me,” he said of the plunking. “I thought it was a weak move, to be quite honest. It’s over. It’s didn’t hurt by any means, so I don’t care. Whatever. We move on. We got a series win, and I hope we play those guys, I really do.”

“I was just like, I missed arm-side, like I miss arm-side a lot. I pitch inside all the time, and [umpire Joe West] was like, ‘You’ve just got to go,’” Borucki said.

“He missed. He hit him, but I understand what it looks like. I understood how the Rays got upset about it. That thing was on for two days,” Montoyo added.

Tampa Bay won the game 7-1 on Wednesday and clinched a postseason spot for the third straight season.

If Toronto wants to make the playoffs, the team will have to win some of its final few games of the season. The loss on Wednesday put the Blue Jays out of a wild card spot after the New York Yankees finished off their sweep of the Texas Rangers. The Jays are now a half game out of the final wild-card spot.