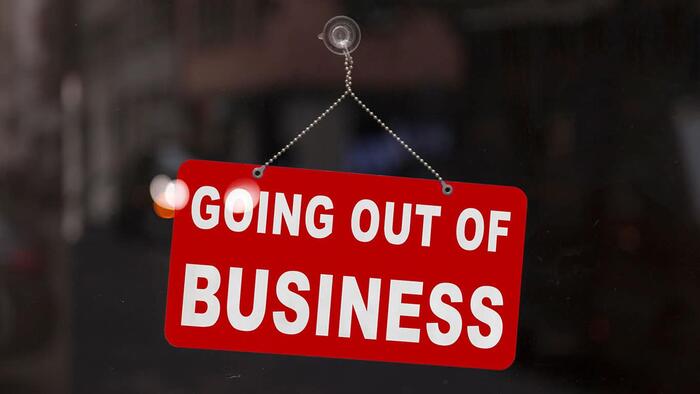 Authored by Mike Shedlock via MishTalk.com,

Small businesses are struggling to pay rent due to higher rent inflation and fewer customers. The struggles vary by type of business…

Due to ongoing economic challenges, small business owners’ ability to pay their full rent on time in October took a major hit based on a new Alignable poll. In fact, the U.S. rent delinquency rate among small businesses jumped 7% in just one month, marking the largest, most rapid increase in 2022.

In September, rent delinquency was at a six-month low, as optimism for Q4’s earning potential was high and some small business owners reported increased sales.

But now, a month later, 37% of small business owners in the U.S. were unable to pay their rent in full and on time in October, compared to just 30% in September.

The overall delinquency rate jumped to 37 percent in October from 30 percent in September and from 26 percent in December of 2021.

Manufacturers are doing OK, only up one percentage point since December of 2021.

This is an interesting set of numbers, especially education. Have parents stopped sending their kids to daycare?

The only relevant article I could find is from February 24, 2022.

Federal data analyzed by Stateline shows that parents of small children have left the workforce in much higher numbers than other working adults during the pandemic.

In the last quarter of 2021, 6% fewer jobs were held by parents of children ages 5-12, both mothers and fathers, compared with the same period in 2019, while other prime-age workers were only 1% short of pre-pandemic job levels, according to a Stateline analysis of census numbers provided by ipums.org at the Institute for Social Research and Data Innovation at the University of Minnesota.

Parents, especially mothers, have lagged in returning to work, partly because of periodic school closures due to COVID-19 outbreaks.

“At the beginning of the pandemic, at least everybody was on the same page and realized we were all in this terrible thing together. Now it feels like parents are alone in this. We’re forgotten,” said William Scarborough, a University of North Texas assistant professor who has a 3-year-old son in a pre-K program that’s often canceled. Children under 5 years old cannot yet be vaccinated, making them more vulnerable to COVID-19.

Is it still a Covid issue or did that morph into a cost issue?

Also note the surge in gyms and beauty salons.

Not to worry, citing jobs, president Biden says the economy is strong.

Lost in the Strong Jobs Meme, Full Time Employment is Down 572,000 Since May

I suggest, Lost in the Strong Jobs Meme, Full Time Employment is Down 572,000 Since May

Others suggest that the decline in full time employment is noise.

My conclusion remains the same. The decline isn’t noise. It mirrors what happened in 2007.

People are struggling with inflation and a falloff in business activity. There’s no doubt about that.

See the above link for discussion.