Remember 81 Years Ago: The “Day Which Will Live In Infamy” 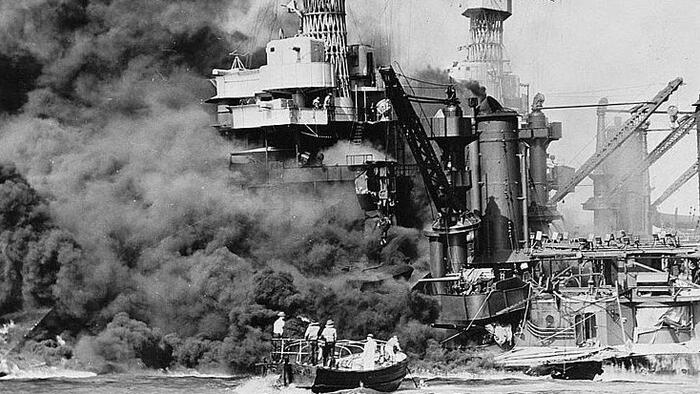 Authored by Ethel Fenig via AmericanThinker.com,

Today’s Japan has an aging population which is slowly declining, but 81 years ago, it was a powerful imperialist island nation. So powerful, so imperialistic, that on December 7, 1941 Japan launched an attack against the greatest nation on earth, and bombed Hawaii’s Pearl Harbor.

As morning colors were readied and sailors and civilians ate breakfast, the Japanese planes struck. In fifteen minutes, the main battle line of the Pacific fleet was neutralized. The active battleships USS California, USS Oklahoma, USS West Virginia, USS Nevada, and USS Arizona were sunk, as well as the old USS Utah, which was then being used as a target and antiaircraft training vessel. The battleships USS Maryland, USS Tennessee, and USS Pennsylvania were damaged.

Initially, the American response to the attack was sporadic, but within five minutes American vessels began to fire back in earnest against the attackers. Relayed to the fleet was this message, “Air raid Pearl Harbor, this is no drill!”

The assault of the first wave ended about 8:45 a.m. There was a momentary lull before the second wave of Japanese planes arrived at 8:50 a.m. No torpedo planes came with the second group of dive and high-altitude bombers.

As the second wave withdrew, Mitsuo Fuchida, the military pilot who led the first wave, circled Pearl Harbor and assessed the damage. Satisfied, he took a last look and signaled to his pilots to return to the Japanese carrier. The main objective of the attack —  demobilizing the Pacific Fleet — had been accomplished. More than 2,400 Americans were killed and 1,104 wounded. Twenty-one ships of the Pacific Fleet were sunk or damaged, and 75 percent of the planes at the local airfields were damaged or destroyed. The next day the U.S. declared war on Japan; just days after that, Germany too became an official enemy, marking the American entry into what turned out to be World War ll.

Bob Batterson, a 101-year-old Pearl Harbor survivor, relayed the horror of the 90-minute surprise attack – as reported yesterday at a local news outlet:

At first Batterson and his roommates thought the warning siren and loud noise was a drill, but he soon realized instead, it was a massacre.

Still, he remembers the unbelievable sights of carnage and tragic sounds of fellow sailors trapped inside the belly of battleships.

‘They lived in that hell for three days,’ said Batterson.

Now, 81 years later, Batterson has some sound advice for his fellow Americans, and considers Pearl Harbor a teachable moment to never let our collective guard down, “To remind us that we’ve got to remain alert. We have got to get involved[.]”

In Batterson’s eyes, that future depends on whether we learn from all the lives lost on that “date which will live in infamy” or be vulnerable to yet another dark day for America. Additionally:

‘This is a good way to make sure that we remember those guys – we don’t forget,’ said Batterson.

‘They died for us, and we’ve got to protect this country as best we can.’

They died so others may live! Nearly four years later, in the wake of the atomic bombing of Hiroshima and Nagasaki, the Japanese finally surrendered. But the cost of American lives was immeasurable. So, as you go about your day, remember, and say some words of gratitude to those who secured our freedom.

We are walking 50 miles from Kaneohe to Pearl Harbor to honor the 81st anniversary of the attack on #PearlHarbor, and our brothers and sisters who have paid the ultimate price. We honor all who serve & sacrifice to defend the safety, security and freedom of the American people. pic.twitter.com/Tq35dvsBMv