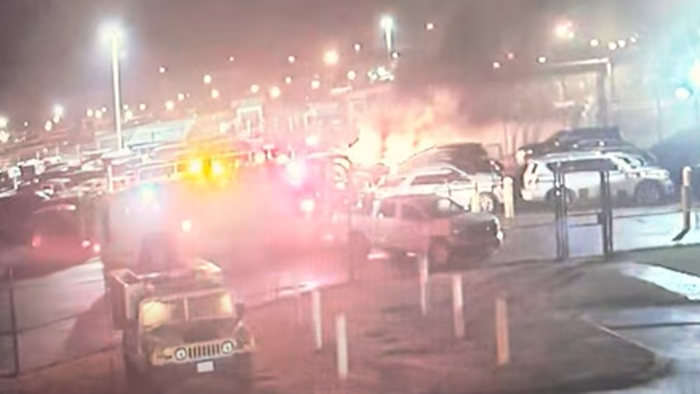 Five vehicles rented by the Secret Service to protect President Biden and his family during a trip to Nantucket were destroyed in a mysterious fire on Monday morning.

The Nantucket Current reported just after 0530 ET on Monday, and less than 24 hours after Secret Service agents dropped off the vehicles at Nantucket Memorial Airport, a fire erupted in at least one and spread to the other four.

The vehicles were among numerous cars that had been rented by Hertz to the Secret Service during President Biden’s stay on the island for the Thanksgiving holiday, two sources told the Current. They had been returned to Hertz less than 24 hours before the fire broke out. — The Current.

The vehicles — including a Chevy Suburban, a Ford Explorer, a Ford Expedition, a Jeep Gladiator, and an Infiniti QX80 — were all rented from Hertz. Agents used the vehicles for security purposes, and the president nor his family road in any of the SUVs, a Secret Service spokesman told Bussiness Insider.

“We had no issues when we drove the vehicles and they were returned without incident.

“We look forward to following up with local fire authorities on their review of the incident,” Anthony Guglielmi, a Secret Service spokesman, said

The Nantucket Current pointed out investigators have been “focused on a white Ford Expedition as the initial source of the fire.” They say the vehicle was under a safety recall by Ford due to faulty wiring that has caused fires elsewhere, noting the defective part had yet to be fixed.

The local newspaper obtained footage of the blaze at the airport’s parking lot, just 40 feet from a jet fuel tank farm.

An investigation has been launched into the incident. Nantucket Fire Chief Michael Cranson has already determined that the blaze was not suspicious. Still, it’s fueled a lot of conspiracy theories online.