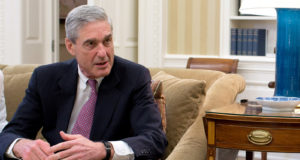 Special Counsel Robert Mueller has long been conducting a witch hunt, inspired by an insane conspiracy theory cooked up by bitter democrats.

When Hillary Clinton took what we hope to be her final fall from grace back in November, the democrats were stunned.  Clinton was a shoe-in according to herself and everyone that she was surrounded by.  The shock of her loss was so great that the former First Lady reportedly sucker-punched campaign manager John Podesta in a drunken rage before storming back to her hotel; ignoring her public concession speech for the night.

When Clinton finally came around to admitting that she had been bested, the blame game began in earnest.   The whispers about Kremlin collusion and Russian election hacking turned into full-voiced accusations against the incoming Trump administration.  Even though these possibilities had been thoroughly debunked during the election, a Special Counsel was assigned to investigate them anyway, headed up by none other than Robert Mueller.

Now, after Mueller has admittedly move well beyond the scope of the original probe, it seems that nothing is off limits.  According to former colleagues of his, this sort of behavior is mild compared to what Mueller is capable of.

“Special Counsel Robert Mueller and his team running the Russia collusion probe are being accused by fellow attorneys of employing aggressive and questionable tactics in past cases, potentially putting a dent in his straight-shooter image.

“As the investigation heats up and key players like former White House chief of staff Reince Priebus and press secretary Sean Spicer are interviewed by investigators, several attorneys with experience in federal cases spoke out with their concerns this week.

“Harvey Silverglate, a criminal defense attorney in Massachusetts, wrote an opinion piece accusing Mueller of once trying to entrap him when Mueller was acting U.S. attorney in Boston.

“’I have known Mueller during key moments of his career as a federal prosecutor,’ Silverglate wrote for WGBH News. ‘My experience has taught me to approach whatever he does in the Trump investigation with a requisite degree of skepticism or, at the very least, extreme caution.’

“According to Silverglate, Mueller once sent someone into Silverglate’s office offering to give false testimony for a client. Silverglate said he turned the offer down and noticed the man was wearing a wire.”

This could very well be merely the tip of the iceberg when it comes to Mueller’s shady practices, as a man with a vast wealth of experience such as Mueller would not likely stray into ethical morasses on occasion.

President Donald Trump has been the recipient of enormous conflict already in his time as Commander in Chief, and he will likely see more adversity from Mueller before the Special Counsel closes the book on Hillary Clinton harebrained assertions.  As long as Mueller plays by the rules, there should be little to fear.  The worry is…will be?