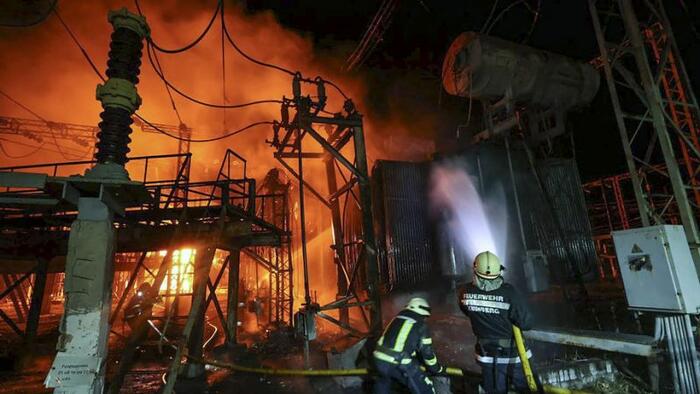 It was only a matter of time.  The recent Russian pull-back of troops clearly indicated a broad shift in tactics, and the one thing that the Kremlin avoided for several months seemed like the next most logical step – Full spectrum strikes on Ukrainian infrastructure.

Initially, Ukraine’s media spin suggested that the precision strikes were “ineffective”, with western news outlets showing only a handful of images of craters in streets and some scarred apartment buildings.  There were limited admissions of damage to the power and water grids, but Ukraine claimed that these systems would be back and functional within days.  This did not happen.

Not surprisingly, Ukraine suffered far more damage to their utilities than the government and media let on.  Later estimates ranged from 60% to 80% of the nation’s grid destroyed or unusable and the latest satellite photos of active lights at night support this.  Below, we can see lights across Ukraine on February 24th at the start of the war.

Next, we have an image taken from November 24th.

More than half the nation is in total darkness and the comparison to neighboring countries is stark.  For the majority of the war Ukraine enjoyed near full use of their power grid, internet, water, gas, and other amenities, which is highly unusual during an invasion.  The reasons for Vladimir Putin seeking to avoid damage to infrastructure are unknown, but public optics are the most likely explanation.  With power resources nearly destroyed, the citizenry of Ukraine is facing a long cold winter with little to no relief in sight.

No doubt the media will portray this as a cold weather holocaust, though, elimination of infrastructure is usually the first measure of a large scale attack.  It is standard operating procedure for the US military, for example.  At this point, the coldest temperatures have yet to hit Ukraine, with average lows of 21°F (-6°C) in December.  This kind of weather is not a problem with infrastructure intact, but with the grid down there will be chaos.

Water pipes will freeze and bust across major population centers, leaving only well water. The effects of the cold will be cumulative, and without heating and electric most other operations including economic operations will grind to a halt.  Ukraine’s population will have gone from relative comfort to brutal survival in the span of a couple months.

The next most obvious outcome is a refugee crisis, with millions of people seeking shelter in neighboring countries in order to escape the cold.  Though mainstream analysts are finally admitting to the grid problem, there is still very little coverage of the actual consequences we are about to witness.  The assertions that Ukraine is “winning” the war are harder to sell while at the same time acknowledging the massive economic and humanitarian disaster that is escalating in the wake of supposed victory.