SBF Issues Another Rambling Apology And “Description Of What Happened”, Comes Off As Disturbed Sociopath 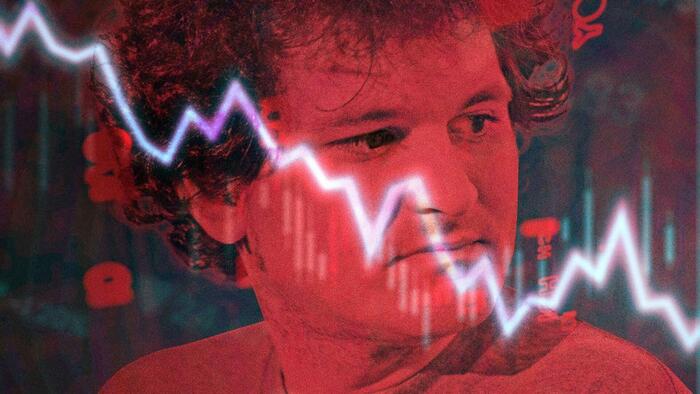 He just can’t help himself: disgraced sociopath, record-breaking fraudster and prolific Democratic donor – not necessarily in that order – Sam Bankman-Fried, has issued another apology to his staff in a letter that outlined a crash in “collateral” to less than $9 billion from $60 billion.

“I didn’t mean for any of this to happen, and I would give anything to be able to go back and do things over again,” the corpulent 30-year-old who may or may not be in the Bahamas apologized yet again in the message sent to employees Tuesday, although he really should be apologizing to the millions of clients whom he wiped out. Alas, like the recurrent ramblings of a psychopath, Sam’s takeaway was that the implosion at FTX was the side-effect of an unfortunate bank run, and had nothing to do with SBF’s actions; that’s because SBF still refuses to take any responsibility for what happened and makes zero admission that the factors that led to this historic bankruptcy were in his control all along. Sam claims that he didn’t “realize the magnitude of risk.” His main remorse – like that of any pathological individual – is that he got caught.

Still don’t believe us he was a sociopath? Read this:

I didn’t mean for any of this to happen, and I would give anything to be able to go back and do things over again. You were my family. I’ve lost that, and our old home is an empty warehouse of monitors. When I turn around, there’s no one left to talk to. I disappointed all of you, and when things broke down I failed to communicate. I froze up in the face of pressure and leaks and the Binance LOI and said nothing. I lost track of the most important things in the commotion of company growth. I care deeply about you all, and you were my family, and I’m sorry.

No he isn’t, and if it wasn’t his fault, whose fault was it? Well, as he “describes” the sequence of events, you see it was all the market’s fault as a slide in digital-asset markets in spring roughly halved collateral from $60 billion to $30 billion, while liabilities were $2 billion. A combination of a credit squeeze, a further selloff in virtual coins and a “run on the bank” left collateral at $9 billion ahead of FTX’s Nov. 11 bankruptcy, he wrote. The estimate for liabilities had reached $8 billion by then. Here is how, in his words, what was initially a $58 billion overcollateralized balance sheet ended up having more liabilities than assets.

“I did not realize the full extent of the margin position, nor did I realize the magnitude of the risk posed by a hyper-correlated crash,” Bankman-Fried said. He didn’t give exact details on the makeup of the collateral or the liabilities. If he did, it would look something like this chart from Morgan Stanley:

What happens next is what any sniveling sociopath posing as a CEO would say: I had no idea any of this could happen:

I did not realize the full extent of the margin position, nor did I realize the magnitude of the risk posed by a hyper-correlated crash.

And it is here, that we get the first admission that something nefarious happened: i.e., loans  – to related parties, such as the $4 billion “given” from FTX to SBF – and the “secondary sales” which we now knows SBF pocketed some $300 million for personal use.

The loans and secondary sales were generally used to reinvest in the business—including buying out Binance—and not for large amounts of personal consumption.

And so, ladies and gents of the jury, would you consider a $40 million penthouse to be a “large amount of personal consumption.” And what about a private jet: in this day and age everyone needs one, how can one possibly define that as “large amount of personal consumption.” As for the meaning of “generally”, we are confident SBF’s close buddy Bill Clinton will give him the proper definition of that word.

Prudently, there was zero mention in Sam’s meandering word salad that FTX had illegally commingled and sent billions in customer funds to SBF’s personal hedge fund, Alameda, which despite frontrunning virtually every crypto transaction still lost $3.7 billion before 2022. That’s ok, Sam can discuss that in court.

There was, however, the usual lies, including SBF’s increasingly warped representation of reality, which is to be expected: as noted above, he is after all, a sociopath.

We likely could have raised significant funding; potential interest in billions of dollars of funding came in roughly eight minutes after I signed the Chapter 11 docs. Between those funds, the billions of dollars of collateral the company still held, and the interest we’d received from other parties, I think that we probably could have returned large value to customers and saved the business.

Maybe there still is a chance to save the company. I believe that there are billions of dollars of genuine interest from new investors that could go to making customers whole. But I can’t promise you that anything will happen, because it’s not my choice.

That’s right: it is now all in the hands of the person who presided over the Enron bankruptcy and who thinks your fraud is way worse.

And speaking of fraud, there was one sentence in the whole letter where this pathological liar may have told the truth, if inadvertently:

… None of this changes the fact that this all sucks for you guys, and it’s not your fault, and I’m really sorry about that. I’m going to do what I can to make it up to you guys—and to the customers—even if that takes the rest of my life. But I’m worried that even then I won’t be able to.

No, you won’t be able to, but when it comes to “the rest of your life”, both the “guys” and the customers who you left with nothing because of your infinite greed, fraud and incompetence, they all have an idea where you can spend it.

Whether or not that happens will depend on just how broken the US legal system is, where a few million in donations to prominent democrats may be all it takes to get a lifetime “get out of jail” card.

SBF’s full letter to his now former employees is below