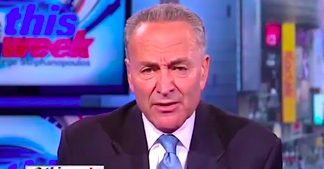 The device, and its damning contents, have grown into a campaign-killing scandal for Hunter’s father, Democratic presidential nominee Joe Biden.

Information discovered on the laptop hints that the Bidens were allegedly involved in international business schemes that saw unfair payments and deals secured thanks to the power of the elder Biden’s position as the former vice president.

Seeing the potential for even more abuse if the Biden was to win the White House, some politicians worked to confirm the bombshell discoveries.

After a thorough review by his staff, Rep. Jim Jordan claims to have independently verified the contents of the laptop.

“Our staff has had numerous conversations,” Jordan said Tuesday, “which have independently confirmed for us that in fact these emails are real, they’re authentic.”

Unfortunately, not everyone in Washington, D.C., is itching to get to the bottom of this case.

Some, like Senate Minority Leader Chuck Schumer, are actively working to suppress an investigation into the laptop allegedly belonging to Hunter Biden.

“We are deeply concerned,” the Thursday letter continues, “about the possibility that in response to these reports the Trump Administration will take actions before Election Day that would seek to damage the Democratic presidential candidate and undermine the rule of law.”

The letter urges Wray “to resist pressure from President Trump and other partisan actors to take any actions intended to benefit President Trump politically on the eve of the election. Succumbing to such pressure would deeply undermine our national security interests and the credibility of law enforcement, and could have devastating consequences for the resiliency of our democracy.”

It’s unclear how Schumer thinks an investigation into a credible accusation of wrongdoing would undermine the rule of law.

Just to be clear, the campaign of President Donald Trump doesn’t need to do anything with the laptop scandal — data found on the device is damning enough already.

With the data cache’s credibility continuing to grow, Biden and Democrats are facing even more pressure as Hunter Biden’s former business associates flip on the family.

Emails provided by one former associate appear to confirm that the junior Biden traded on his father’s influence and position.

The day before the final presidential debate between Joe Biden and Trump, another former associate stepped forward and further backed up the alleged shady practices of the Biden family.

While Schumer’s long-shot attempt to keep the contents of the laptop under wraps and away from the American people looks like it’s doomed to fail, it hints at what the lawmaker really thinks of the American voters’ right to know their candidates.

For the FBI, failing to investigate the alleged laptop of Hunter Biden would be a travesty of justice, and would virtually confirm to the public that the federal law enforcement agency is biased beyond hope.

This article appeared originally on The Western Journal.