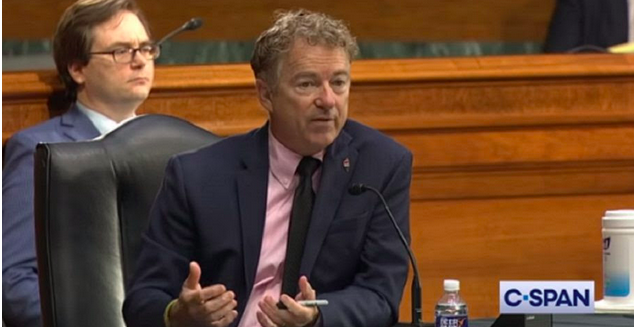 According to the National Institutes of Health (NIH), gain of function research involves the genetic modification and experimentation of viruses and pathogens to increase strength and transmissibility.

At a Senate hearing in May of 2021, Dr. Anthony Fauci, the director of the National Institute of Allergy and Infectious Diseases and chief medical adviser to the president, adamantly declared to Congress, “The NIH has not ever and does not now fund gain-of-function research in the Wuhan Institute of Virology [in China],” where leaders and investigators from around the world believe the COVID-19 virus originated.

Dr. Richard Ebright, Rutgers University microbiologist and chemistry professor and Waksman Institute of Microbiology laboratory director, emphatically declared in the Senate hearing, “The statements made on repeated occasions to the public, to the press and to policymakers by the NIAID director, Dr. Fauci, have been untruthful. I do not understand why those statements are being made because they are demonstrably false.”

The full hearing is still available to watch via C-SPAN, and I encourage you watch it and hear the damning evidence for yourself.

“Gain-of-function research has historically been supported by tax dollars both domestically and internationally; as such, this hearing lies at the intersection of the subcommittee’s two primary jurisdictional responsibilities – monitoring emerging threats and conducting oversight of federal spending,” Kentucky Sen. Rand Paul said in a press release.

That is why Dr. Steven Quay, the founder of Atossa Therapeutics Inc., a clinical-stage biopharmaceutical company seeking to discover and develop innovative medicines, testified and warned that “the work of this committee is critical to protecting the American people and, really, the world at large, from future man-made pandemics.”

The crazy thing is that mainstream media didn’t even mention this important Senate hearing last week. Instead of report on the work of this “critical committee” and the damning evidence proving Fauci’s lies to Congress about the NIH’s gain-of-function funding in Wuhan, they opted to report on the news that a man who threatened to kill Fauci received a three-year sentence in prison.

Liberal media will report on any miniscule finding in the Jan. 6 Capitol riots, especially if it is damning evidence against former President Donald Trump. They turn a blind eye and deaf ear, however, when it comes to the “infallible Fauci” and the NIH.

Is there no one culpable for a pandemic that ravaged the world and our country, causing the lockdown of Americans and businesses that decimated hundreds of millions of lives, livelihoods and families? Does anyone in Washington care besides Sen. Paul and his colleagues?

Most Americans don’t know the exhaustive evidence that the origins of COVID-19 virus center around China’s Wuhan Institute of Virology (WIV), which is strangely and highly protected by the U.S. Centers for Disease Control and Prevention as well as the World Health Organization.

Speculations about COVID-19’s creation and birth at the Wuhan lab are well-founded and documented. Here are just a few facts we know:

Virologist Danielle Anderson was the only foreign scientist (the world is aware of) that had undertaken research at the Wuhan Institute of Virology’s BSL-4 lab. She arrived in 2016 and left the facility in November 2019 right at the time of the outbreak. I don’t know what shuttled her away at such a perfect time, but it seems as choreographed as other covert elements of this Chinese viral saga.

Being there only three short years, Bloomberg News reported that Anderson said, “Entering and exiting the facility was a carefully choreographed endeavor. … Departures were made especially intricate by a requirement to take both a chemical shower and a personal shower – the timings of which were precisely planned.”

Though Anderson doesn’t subscribe to malicious intent origins, she said the Wuhan lab is so large that she “didn’t know” what everyone was working on at the end of 2019. She also confessed that if presented with evidence, she “could foresee how things could maybe happen. I’m not naive enough to say I absolutely write this off.”

She also conceded that “it would be theoretically possible for a scientist in the lab to be working on a gain of function technique [genetically manipulating a virus to give it new functions] to unknowingly infect themselves and to then unintentionally infect others in the community.”

Her personal conclusion was that: “The pandemic is something no one could have imagined on this scale,” but then confesses again: “The virus was in the right place at the right time, and everything lined up to cause this disaster.”

“Everything lined up” by chance? By itself? Could such “perfect timing and orchestration” be far more than an accident or coincidence? Is there an agency that could have caused it?

According to China’s most famous political prisoner and defector, Wei Jingsheng, who is still in touch with top governing insiders in the communist country, the Chinese military has sinister plans afoot.

In the must-read amazing and insightful new book and exposé, “What Really Happened in Wuhan?” by the award-winning Australian investigative journalist Sharri Markson, Wei is just one of many Chinese whistleblowers who unveil the communist COVID-19 plot. He even warned U.S. intelligence and political officials about the coronavirus in October 2019, but received no response.

In chapter 21, titled “Military Games,” Markson explained: “Wei, a former Communist Party insider from one of the 500 founding families, is a seven-time nominee for the Nobel Peace Prize and the winner of the Robert F. Kennedy Memorial Human Rights Award, the European Parliament’s Sakharov Prize for Freedom of Thought, the U.S. National Endowment for Democracy Award and Sweden’s Olof Palme Memorial Prize … known as the godfather of the [Chinese] Democracy Movement, Wei’s voice is credible and he deserves to be heard.”

Wei explained, “In September [18th] 2019, the Chinese government held a large-scale ‘anti-Coronavirus exercise’ in the airport and hospitals of Wuhan, which was equivalent to a military exercise. … The exercise included epidemiological investigation, medical investigation and temporary quarantine.”

“In Wei’s opinion, it’s possible there was a deliberate release of the coronavirus during the [October 2019] Military World Games to test the biological warfare, and send the virus back around the world through the visiting athletes.” (This is same exact month that U.S. satellite surveillance images captured all the Wuhan hospitals’ parking being overwhelmed to capacity! As the Daily Mail reported, “an untold number of corpses started flooding the city’s hospitals.”)

Wei is not alone in his Chinese suspicion. In June of 2021, many Republican members of the U.S. Congress launched their own investigation.

The Washington Post reported, “more than 9,000 international athletes from more than 100 countries traveled to Wuhan, China – and many of them later got sick with Covid-19-like symptoms. But there has never been a real investigation into whether the virus that causes covid-19 was already spreading at the Wuhan Military World Games.”

“The State Department’s only consideration of the Wuhan Military World Games came when the Chinese foreign ministry began citing the event in its own propaganda in March 2020. The Chinese asserted that U.S. Army personnel might have brought the virus to Wuhan from Fort Detrick in Frederick, Md., where the U.S. Army bioresearch program is based. That didn’t make sense because the first outbreak was in Wuhan, not Maryland. …”

“We were aware in the administration of the Chinese government’s misinformation campaign accusing the U.S. military of bringing Covid to Wuhan at those games, which obviously we didn’t take seriously and didn’t consider to be a good-faith effort to get to the bottom of it,” David Feith, a former State Department official said. “To the extent there are now or there were all along credible reports of sick athletes from those games, we should certainly chase them down and learn more.”

“If the Biden administration is as serious as it claims to be regarding investigating the pandemic’s origins, it must go back and test all the U.S. military personnel who were in Wuhan for antibodies and then attempt to trace any outbreaks that might have come from their trip to the games. Other countries with athletes who got sick must do the same. It’s true, the value of the data may have waned over time, because antibodies dissipate and tracing is more difficult. But it’s still worth trying, and there’s no honest argument for ignoring this issue.”

Markson asked, “What would be the motive for such [a Chinese military viral] attack?” Defector Wei answered: “If everything goes well without being discovered, then in the future, they can engage in vaccine diplomacy, expand the circle of friends and fight against the West.”

In September 2020, Nature documented “China’s coronavirus vaccine shows military’s growing role in medical research“: “The largest armed force in the world, China’s People’s Liberation Army (PLA), is not known for its cutting edge medical research. But since 2015, it has ramped up recruitment of scientists, and investment in the field as part of its strategy to modernize its military. Now, the coronavirus pandemic is showcasing the PLA’s growing expertise in medical research, including a major role in developing the coronavirus vaccine that was the first in the world to be approved for restricted use.”

The Halloween-type nightmare in the Wuhan chronicles is that the U.S. has also been funding China’s gain of function research on the coronavirus for years through the National Institute of Health, and therefore (as hard as it is to hear) enabled (if not assisted in) the creation of the global pandemic.

Dr. Richard Ebright, who testified before Congress last week, confirmed this fact to Newsweek in 2021 as “unequivocally true” – again, something Dr. Anthony Fauci repeatedly denied (and therefore lied) before Congress.

Yahoo News even reported in 2021, “NIH Admits to Funding Gain-of-Function Research in Wuhan, Says EcoHealth Violated Reporting Requirements“: “A top NIH official admitted in a Wednesday letter that U.S. taxpayers funded gain-of-function research on bat coronaviruses in Wuhan and revealed that EcoHealth Alliance, the U.S. non-profit that funneled NIH money to the Wuhan Institute of Virology, was not transparent about the work it was doing.”

With scientists’ increasing and maddening rush for gain-of-function research, which even recently created the world’s first synthetic embryo, I believe some are tampering with twisted mentalities that could eventually unleash unbelievable and unequaled harm on the human race never seen since the Fall of Man.

There’s one thing I know for sure: It’s only a matter of time before the Wuhan smoking gun is officially unveiled. We should pray that it is discovered before another viral shot is fired from the Chinese chamber, with even more devastating and disastrous national or global effects.

As satirist Douglas Adams said, “If it looks like a duck, and quacks like a duck, we have at least to consider the possibility that we have a small aquatic bird of the family anatidae on our hands.”