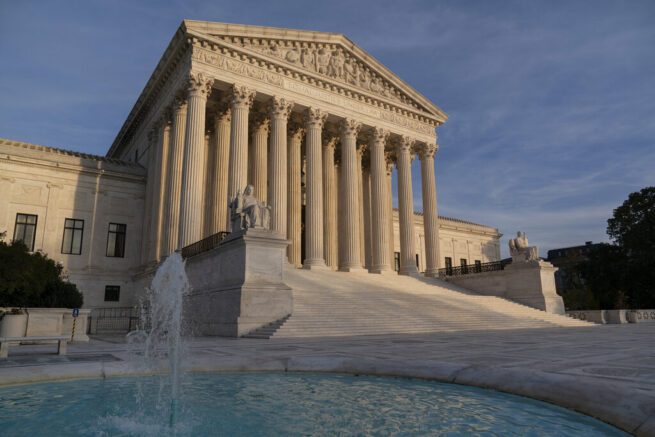 FILE – In this Nov. 5, 2020 file photo, the Supreme Court is seen in Washington. The Supreme Court will take up challenges to controversial Trump administration policies affecting family-planning clinics and immigrants, even though the Biden administration has announced it is reviewing them. (AP Photo/J. Scott Applewhite)

The Supreme Court has rejected three GOP elections-related lawsuits regarding the state of Pennsylvania.

In a six-to-three decision Monday, the court refused to hear a case challenging a three-day extension of the deadline to receive mail-in ballots in the state. Justices John Roberts, Amy Comey Barrett and Brett Kavanaugh sided with their liberal colleagues while Justices Clarence Thomas, Samuel Alito and Neil Gorsuch dissented.

The court also moved to deny hearing a case seeking to overturn Joe Biden’s victory in the state and another similar case by the Trump campaign. In the dissent, Justice Thomas argued “the absence of evidence of voter fraud is not enough to instill confidence in election integrity.”

SCOTUS declines to take up a pair of leftover cases from the 2020 election. They involved the authority of the Pennsylvania Supreme Court to extend the state’s mail-in ballot deadline. Thomas, Alito and Gorsuch say the court should have granted review. https://t.co/RkzsCeb1Hi

This comes as millions of Americans, including loyal allies of the 45th president on Capitol Hill, continue to raise concerns about issues in the election.

“Once the electors are counted, yes, he’s the legitimate president,” stated House Minority Whip Steve Scalise. “But if you’re going to ignore the fact that there were states that did not follow their own state legislatively set laws, that’s the issue at heart that millions of people still are not happy with.”

Following a meeting with President Trump in Florida, Scalise noted he still cares a lot about the country.