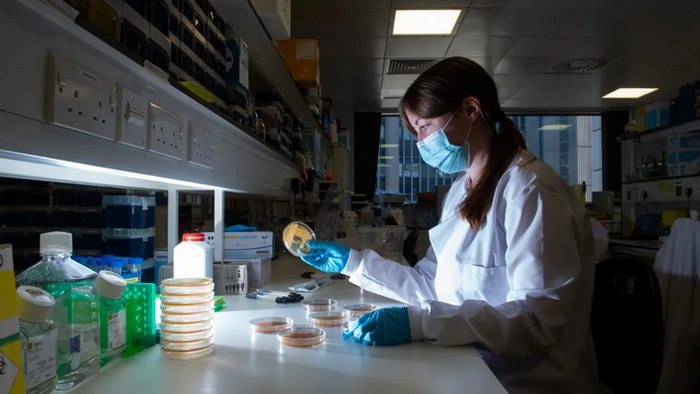 A new study has found both feces and vomit-inducing pathogens all over the surfaces of self-service checkout kiosks.

British scientists took swabs from every day items touched by multiple people – and found thousands of bacteria on the frequently used payment machines, according to Study Finds.

Present on nearly all surfaces was E. Coli, while fecal bacteria and microbes associated with urinary tract infections (UTIs) were also found on the self-service screens.

A bug commonly found in the vagina, mouth, throat and gut called Candida albicans, which can cause yeast infections, was also discovered on an escalator handrail.

And shoppers may also be at risk if they share their desk with others at work, as intestinal microbes that can cause a range of infections, including UTIs, were found on computer keyboards. The findings were confirmed by scientists at the Infection Innovation Consortium (iiCON) in Liverpool, England, which led the study. -Study Finds

“The self-checkout samples had one of the highest bacterial loads, as we found five different types of potential disease-causing bacteria surviving on them,” he told the South West News Service. “This included Enterococcus which is found in human feces and, while this is usually harmless, it can of course lead to disease, particularly in those who may have weakened immune systems.

“This included Enterococcus which is found in human feces and, while this is usually harmless, it can of course lead to disease, particularly in those who may have weakened immune systems,” he continued. “While both exist naturally in feces and intestines, given the right environment, they are able to cause quite severe diseases in humans, so it’s vital that we wash our hands before and after eating when working at the computer.”

According to Dr. Roberts, shoppers need to minimize risk by washing their hands regularly, especially after using the bathroom.

“It’s vital to try to minimize their effects in terms of infection prevention and control, so when we touch our mouths or go to the toilet and don’t wash our hands, we’ve likely got bacteria from these places on our hands which can then transfer to other things – and subsequently to other people,” he said. “If those individuals are more susceptible to infection than you are, there may be a problem.”

Previous research confirms the common suggestion that it’s best to wash your hands for at least 20 seconds to get rid of infectious bacteria. A mathematical model concludes that it takes that long for bacteria to escape from the “valleys” in the surface of the skin that requires a heavy stream of water and fast scrubbing. Other studies suggest only 5.3 percent of people spend 15 seconds or longer washing, rubbing and rinsing, with the average time spent being only six seconds. -Study Finds

Liverpool Director of Public Health, Matt Ashton, said that those with vulnerable family members should take are to wash their hands. “Our results showed that there are multiple bacteria living on objects that we touch every single day. These bacteria are completely invisible to the naked eye – surfaces may look clean but can be covered in bacteria,” he said. “But there are simple things we can do to prevent the spread of them and stop the transfer completing its cycle”

“This is particularly important if you are visiting vulnerable relatives in hospitals and care homes, for example. Hospital admissions for illnesses like Norovirus and flu always spike at this time of year, but we can take steps to reduce how quickly germs transfer from one person to another, by simply keeping our hands clean – washing them after going to the bathroom and before and after.”