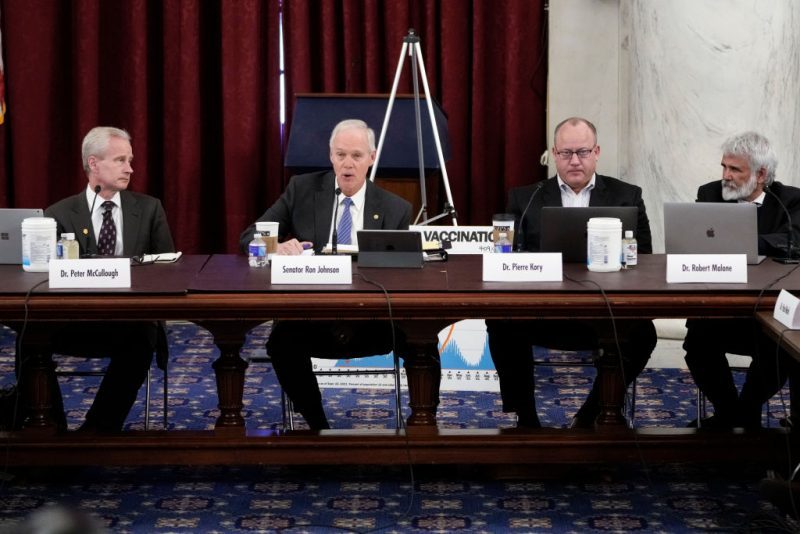 On Wednesday, Senator Ron Johnson (R-Wis.) was joined by medical experts and doctors who specialize in COVID-19 vaccine research and treatments. A notable guest at the panel included Dr. Peter McCullough. McCullough is a trained academic internist, cardiologist and epidemiologist. Dr. Robert Malone, an American physician, biochemist and an mRNA vaccine pioneer was also in attendance.

Discussions revolved around sicknesses and side effects from the vaccinations. Some of the topics that were touched on included the dramatic increase in reported illnesses across the Department of Defense. In 2019, there were 35,000 cases of various illnesses, in 2021 there were around 150,000 cases and in 2022, reported illnesses in the DOD were up to 205,000.

Dr. McCullough pointed out that before the vaccine was available to the public, there were around 250,000 deaths due to COVID in the United States. Since the max vaccinations rolled out, there have been around 750,000 reported deaths.

Dr. Malone indicated that the mRNA vaccine lasts for a long time in the human body and that it has a variety of effects that are still being studied. The original vaccine was meant to last several hours in the human body before the body adapts to it and the antibodies degrade it out. Dr. Malone pointed out that the current version of the vaccine “lasts 60 days or more,” which could have various unknown implications.

It was also revealed that the Center for Disease Control and Prevention (CDC) released a report indicating that 79% of all reported Omicron variant cases came from individuals who were already fully vaccinated.

This panel comes after the House of Representatives unveiled their plans to rescind the military’s COVID-19 vaccine mandate. It will be voted on later in the week.