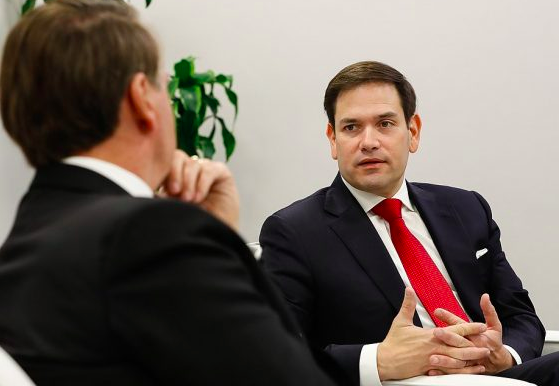 Republican Senator Marco Rubio has a hold on President Biden’s nominee to become the country’s ambassador to China. Rubio argues that Nicholas Burns fails to understand the threat the Chinese Communist Party poses to the country.

Sen. Rubio, a ranking member of the Senate Intelligence Committee, paused Burns’s nomination after his October appearance for the Senate Foreign Relations Committee and one day after Biden’s three-hour discussion with Chinese leader Xi Jinping. Burns previously served as an ambassador during the Clinton administration and a State Department official during George W. Bush’s presidency.

“Nicholas Burns has a long career in public service, but it is a career defined by the failure to understand the threat posed by the Chinese Communist Party,” Rubio said . “In fact, Burns displayed no remorse or concern about his current business relationships with nationless corporations operating in China.”

That is likely a reference to Burns working as a senior counselor at the Cohen Group for more than a decade. The global consulting firm has two offices in China, while its website touts its “solid record of success” in the Chinese market.

Rubio added, “Burns is exactly the type of nominee I expect from President Biden given this administration’s weak approach toward China, including lobbying against my bipartisan Uyghur Forced Labor Prevention Act. The last thing we need is another caretaker of American decline in the room with the Chinese Communist Party.”

Burns has previously said his desired approach to the Chinese Communist Party is for the country to work alongside and cooperate with them.

“We will compete — and compete vigorously — with the PRC where we should, including on jobs and the economy, critical infrastructure, and emerging technologies. As President Biden has said, when the United States competes on a level playing field, there’s no country on Earth that can match us,” Burns said in his opening statement before the Senate last month. “We will cooperate with the PRC where it is in our interest, including on climate change, counternarcotics, global health, and nonproliferation. The world cannot solve the climate crisis unless the PRC does more to reduce their emissions.”

Will this be the latest nominee to fail to gain the needed support to secure the job? So far, Biden has struggled to nominate quality individuals to positions and has been forced to revoke multiple nominations.