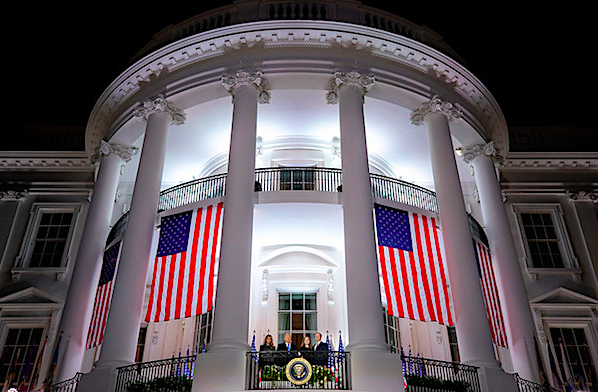 A lawyer who has been fighting for an accurate review of the 2020 presidential election results in Antrim County, Michigan, went on social media this week to charge the election system there was accessed by an anonymous user – remotely – days after the election.

Lawyer Matthew DePerno previously said the evidence appears to show the machines could have been accessed remotely through the internet, and there existed software in the machines that would have allowed manipulation of the results.

The county was where suspicions of vote interference were raised immediately because the GOP-leaning district was declared to have voted for Joe Biden last November. Officials later said there was human error and President Trump actually won.

But it became representative of shady actions or results across the country.

Further, Michigan was one of six battleground states that drew charges of election fraud. Several states suspended counting on Election Night with Trump leading. Hours later, after massive ballot dumps that were nearly 100% for Biden, the Democrat took the lead when counting resumed.

DePerno’s lawsuit was dismissed but actions are on hold because the judge said he expects an appeal, which DePerno confirmed he will pursue.

“2. Those dates are significant because they correspond directly to the dates the county and SOS were trying to correct the intentional computer problems that subverted the election. These logons appear to have escalated privileges at the time of logon. Again .. REMOTELY.”

2. Those dates are significant because they correspond directly to the dates the county and SOS were trying to correct the intentional computer problems that subverted the election.

These logons appear to have escalated privileges at the time of logon.

This is fraud. This decertifies the Antrim County election.

SOS Benson should resign or be impeached.

The Gateway Pundit called it a “BOMBSHELL report.”

DePerno’s social media statements did not include the documentation about the incident of the machines being accessed remotely. But that evidence presumably would be reviewed in his case challenging the integrity of the election in November 2020.

He had reported earlier that the machines could be reopened after an election was finished. “The machines can then run more ballots through the tabulator, print off new tabulator tape with new ballots, and then backdate that tape to November,” he said.

His lawsuit was dismissed partly because the judge said state officials said they already had audited the outcome. But the judge said he expected an appeal and DePerno confirmed it will be pursued.

DePerno also noted during an interview that his investigation into voting machines used in the November election now is not limited to the state of Michigan.

DePerno is fighting the case on behalf of Antrim resident William Bailey.

13th Circuit Court Judge Kevin Elsenheimer said, “By deciding this motion, the court is not saying that there were no problems in the way that Antrim County conducting its November 2020 elections. The clerk has admitted that there were challenges and problems in the elections, although the hand count ultimately of the presidential election showed the results were largely consistent with the canvas totals that were entered by the state and reported by the county. Nor am I saying that the processing of election data here wasn’t corrupted or corruptible. I don’t have the facts to make that determination.”

He added, “”The plaintiff’s reports and news of the day, including a computer hack recently of a main petro fuel pipeline on the East Coast might well suggest that this is something that policymakers should be looking into in the future. If election results were to be held for ransom in the future, one could only imagine what would happen. I am saying that as pled, the plaintiffs’ request for an audit is not available. Anticipating the possibility of appeal, this court will take all pending motions under advisement.”

The fight in Michigan is one of several that have been stirring up “fact-checkers” across the political spectrum in recent weeks. They insist that the claims made by DePerno are “in dispute.”

That’s because, they say, government officials have claimed there are “safeguards” in place to protect “against fraud, including hand counts and audits.”

Just days ago, DePerno explained, “And I’ll tell you something we discovered this weekend. We can now show that after the election is done, someone, anyone really who has access to those tabulators, can reopen the election, run more ballots through the tabulator, print off new tabulator tape with a new balance and backdate that tape to November 3rd.”

Fact-checkers explain Michigan uses paper ballots and they have been preserved, meaning the accuracy of voting machines can be verified.

DePerno earlier said his investigation had revealed that the voting machines there contained a software program that could have been used to manipulate vote totals.

In fact, DePerno said in a podcast interview that with the MySQL program installed on the machines, and them all being linked, someone with access could “do whatever you want.”

Fact-checkers objected to his opinion, stating that many audits done in Michigan of elections all show they’ve been accurate.

DePerno also said recently in a court hearing that there were 1,061 “phantom votes” in the county during the 2020 presidential election, because while a recount of ballots tallied 15,962, the Michigan secretary of state’s database showed only 14,901 votes were cast.