Skyrocketing Fuel Costs Will Lead To A Winter Of Discontent 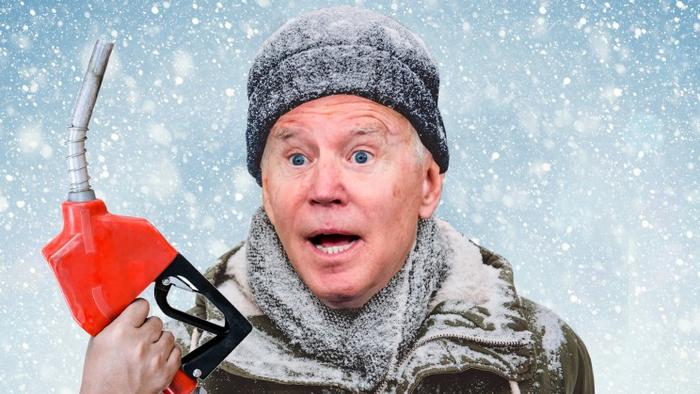 Authored by James Bovard via JimBovard.com,

Get ready for a winter of discontent, thanks to Joe Biden.

One year ago, President-elect Joe Biden warned that Americans would have a “very dark winter” because of COVID. Now that he is president, Biden may give Americans a Valley Forge winter – a season that could be both brutally cold and bitterly expensive. That could produce a political disaster that surpasses all of Biden’s previous bungling.

At a CNN town hall in July, Biden declared, “The vast majority of the experts including Wall Street are suggesting that it’s highly unlikely that it’s going to be long term inflation is going to get out of hand.” After Wednesday’s federal report showing that consumer prices are rising more than 6 percent a year, the White House is changing its talking points. On Wednesday in Baltimore, Biden confided to an audience: “Did you ever think you’d be paying this much for a gallon of gas? In some parts of California they’re paying $4.50 a gallon.”

But Biden’s newfound sympathy for victims of high prices won’t warm any homes this winter.

Natural gas prices have jumped more than 180 percent since September 2020, and that will spur increases in electricity costs. Home heating oil prices have jumped 115 percent over the past year. Fuel oil is up almost 60 percent from a year ago. The federal government forecast last month that home heating costs could rise 54 percent this winter — but heating costs could actually triple, according to some private forecasts.

Biden promised to “do everything in our power to stabilize the supply chain,” one factor in the rising prices. But regardless of the promises by White House aides, Biden has no magic wand to fix the problem. Biden’s unemployment pandemic bonuses paid people not to work, spurring labor force disruptions across the nation.

Pervasive shortages of truck drivers and other occupations assure that the current problems will multiply. The federal Energy Information Administration warned last month that diesel stockpiles — used for home heating oil and other products — are at a 20-year low. “We potentially could see shortages in parts of the country unless the Biden administration treats this as the emergency that it is,” Fox News recently reported.

Biden administration officials are insisting that the surge of inflation is “transitory.” Treasury Secretary Janet Yellen promised last week, “I expect that next year, many of the supply bottlenecks that we’re experiencing now in opening up our economy will recede.”

But the Biden infrastructure bill that Congress just enacted is expected to worsen inflation for key supplies.

Shortly before Biden was elected, America had finally achieved energy independence. But while Biden is talking tough against Vladimir Putin, US imports of Russian oil have soared this year. As the Institute for Energy Research reported last week, “Biden is asking for help from domestic producers without giving them back any of the tools he took away — the Keystone XL pipeline . . . a ban on new oil and gas leases on federal land and waters, and pressure on banks not to lend to the oil and gas industry.” At the same time that Biden is beseeching OPEC to boost oil output, “the Biden administration is sending a strong signal that American energy is not welcome,” the institute notes.

This mindset is epitomized by Saule Omarova, Biden’s nominee for comptroller of the currency, who graduated from college in the Soviet Union. Earlier this year, Omarova declared that “we want [oil and gas companies] to go bankrupt” in order “to tackle climate change.”

How many Biden appointees are willing to see Americans shivering in the cold this winter as long as they can boast of reductions in US emissions at the next international climate summit?

The Biden administration is far more enthusiastic on developing heavily subsidized offshore wind farms (despite their inefficiency) than permitting the private sector to continue fueling American homes and lives.

Biden said on Wednesday that he has ordered “the Federal Trade Commission to strike back at any market manipulation or price gouging” in the energy sector. But there is no federal fix for the problems Biden and other politicians continue creating. Biden is already being widely blamed for the surge in inflation. Soaring home heating prices will embitter citizens who once trusted Biden’s pledges for a smooth return to normalcy and prosperity.

For Biden and his allies on Capitol Hill, the bitter winter could last until the November midterm congressional elections — which could beget an Ice Age for the White House.