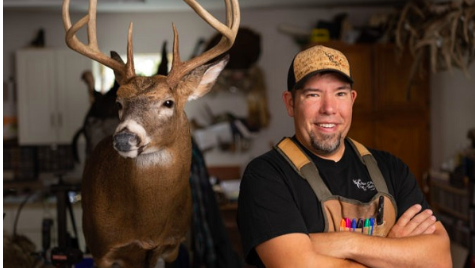 A small business operator in Ohio is in court challenging a state demand that inspectors can look at his private, by-appointment, taxidermy workshop anytime they like.

Whether it’s open or not.

The information about the case comes from the Institute for Justice, which is helping Jeremy Bennett in his dispute.

He “literally built his business from the ground up, teaching himself taxidermy and deer processing and then constructing his shop just yards from his home in Logan, Ohio,” the institute explains. “The shop is a private space, and Jeremy allows customers in by appointment only. He even has signs to that effect posted in and around the shop.”

But that seems not to matter to officers of the Ohio Department of Natural Resources, who have demanded the right to look at his shop “whenever they please.”

“Last year, when Jeremy asked an officer to return when his taxidermy shop was open, he was charged with a crime and threatened with jail time for impeding an investigation,” the institute said.

Now he’s in court asking for a ruling that the state’s warrantless anytime inspection agenda violates the Fourth Amendment of the U.S. Constitution, which provides a right to privacy.

“As it stands, ODNR officers have free rein to enter Jeremy’s shop, look around wherever they please, and stay as long they want,” explained attorney Joshua Windham. “But that’s unconstitutional. Jeremy’s shop is a private space—his wife and young children even filter in and out on a regular basis. If ODNR officers want to barge into Jeremy’s shop without his consent, the Fourth Amendment requires that they get a warrant first.”

Bennett had worked in his business for years without complications, as taxidermy and deer processing are not regulated in the state.

But then came a change in state personnel, and the inspection demands.

“During peak hunting season, Jeremy closes his taxidermy space and works solely on deer processing. After an hour-long inspection in December 2020, an officer asked to enter the closed taxidermy area. Jeremy asked him to return in a few weeks when he had resumed working on taxidermy, and the officer left without objecting. But a few months later, Jeremy was criminally prosecuted and threatened with jail time for ‘refusing’ the officer warrantless entry into his taxidermy shop. Jeremy ultimately agreed to plead no contest and pay a fine of $150.”

But the IJ said business owners should not have to live in fear of random arrivals.

“While the Supreme Court has created a narrow exception for a small number of ‘closely regulated’ businesses, all Jeremy is required to do is keep records,” the IJ said.

“If a record keeping requirement is all it takes to justify warrantless inspections of Jeremy’s business, then few if any businesses would be protected by the Fourth Amendment,” said IJ attorney Joe Gay. “Fortunately, the Supreme Court has sent a strong message that what’s happening to Jeremy violates the Fourth Amendment, and we look forward to explaining that in court.”