Sorry, But Not Killing Babies Is Bad for Business 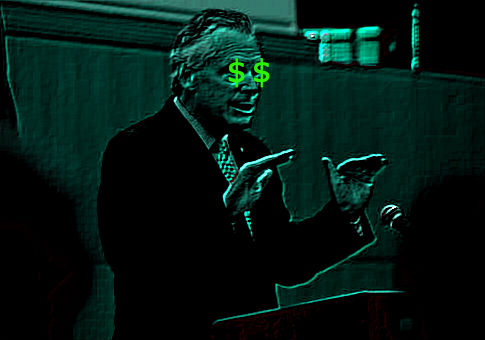 What does the Democratic Party stand for in 2017? The bottom lines of insurance companies? The unfettered operation of our intelligence services? Neo-McCarthyism? Let’s ask the governor of Virginia:

McAuliffe, a Democrat, told The Associated Press on Tuesday that he wants to send a clear message to the Republican-controlled General Assembly not to “waste time” trying to be part of that effort.

The General Assembly’s 2017 legislative session starts next week and McAuliffe does not typically comment on proposed legislation until after it passes both chambers. But the governor said he needed to make clear to companies looking to invest in Virginia that the legislation had no hope of passage.

“I can’t sit back and have that sitting out the same time I am traveling the globe recruiting businesses to Virginia,” McAuliffe said, adding that he is going on an important recruiting trip this weekend. “If there’s something that would be damaging toward business, and to our image around the country and the globe, I’ll veto it, you bet I will.”

McAuliffe has a special genius for doing the wrong thing for the worst possible reason. Your average abortion enthusiast will employ the language of rights and make gestures in the direction of human dignity, which they deny to infants, of course. But Terry doesn’t care about rights. He cares about money.

A decade ago a moderate Democrat was someone like my longtime congressman, Bart Stupak, who was basically a party-line voter apart from the fact that he had a lifetime rating of “0” from NARAL Pro-Choice America. Now it means someone who supports legalized infanticide out of fear of offending the CEO of Apartments.com. I’m imagining how McAuliffe is afraid his “recruiting” talks would go in some horrifying parallel dimension in which a 20-week ban were on the table in Virginia:

Interior of hotel suite. Left in metal folding chair with a bottle of water is TERR BEAR; right, sprawled luxuriantly on an elaborate pink and grey rococo chaise longue is LLOYD PLATEGLASS, MBA.

The problem is this jerk, Rep. Blue Blazer McEntrepreneurship. He’s with us on tearing down beautiful old buildings and replacing them with the most hideous high-rise monstrosities we can find an architect who hates his fellow men to dream up and then keeping them mostly empty with exorbitant rents. He knows how important that is. But the guy is religious, I guess, and for whatever reason he wants to pass this abortion thing.

Terry, Terry, Terry. We’ve discussed this. There is simply no way that we can proceed with our goals of creating an unsustainable cheap-credit-financed uber-gentrified plutocracy unless we continue killing babies.

But why? Listen, Lloyd, my man. I don’t give a good damn about fetal viability. But sometimes I just wonder if it would be easier, especially in a state like mine where most of the people agree with this McEntrepreneurship guy, to line our pockets and uglify the landscape and ignore concrete indicators of people’s well being while allowing a few more babies to be born. Is there some kind of obstacle I’m not seeing?

LLOYD PLATEGLASS, MBA, takes a Marlboro Blue from a silver cigarette case on the front of which diamond studs form the shape of a pentagram. He lights his cigarette, takes a deep, cautious drag, and exhales nervously. Hideously spectral blue smoke fills the air.

Do you really want to know?

Yes, Lloyd, for f—’s sake, I want to know why you’re so hellbent on this. This McEntrepreneurship guy isn’t so bad really. He is every bit as committed as we are to making sure that the Old Dominion is a playground for upper-middle-class white people. He exercises, Lloyd. Hell, he likes small plates.

I’m gonna ask you one more time. Are you sure you want to know?

Yes, just tell me what the problem is and I’ll see if maybe we can do something about it.

There is no doing something about it. In fact, if I were you, I’d stop asking questions. You know what they say about curiosity.

LLOYD PLATEGLASS, MBA, sighs and rises from his chair. He walks out of view while TERR BEAR, clearly agitated, pulls out his iPhone and checks his email. PLATEGLASS appears a few moments later wearing what look like red Roman Catholic vestments for the old Octave of the Holy Innocents; the cope is decorated with dollar signs and miniature skyscrapers. On his head he wears ram’s horns. He spreads a black cloth over the top of the bed and turns his back to TERR BEAR.

What the hell is going on, Lloyd? What are you wearing? Was that Pig Latin you were speaking?

Yes. He used to only respond to the real thing, but regulations have loosened up a bit.

He? Who the hell are you talking about?

TERR BEAR’s water tips over. A clock falls from one of the end tables. The television set crashes to the ground, shattering the screen. A gaping chasm appears in the floor, seeming to extend infinitely. From the flame-filled gulf BREAKSHIT, a demon, appears.

I, Lloyd Plageglass, MBA, OTO, Chairman and CEO of Plateglass Industries and Arch-Priest of Nyarlathotep.

TERR BEAR hides himself under one of the beds, from under which can be heard childish squeals of utter horror.

Why doth this mortal creep in wormish manner beneath thine altar?

O mighty demon, forgivest thou me and him for my sake. He knoweth not the law.

TERR BEAR (from under the bed):

With a single puff of black smoke, BREAKSHIT disappears and the hole in the 37th floor is sealed up.

Don’t be pedantic, Lloyd. You made your damn point.