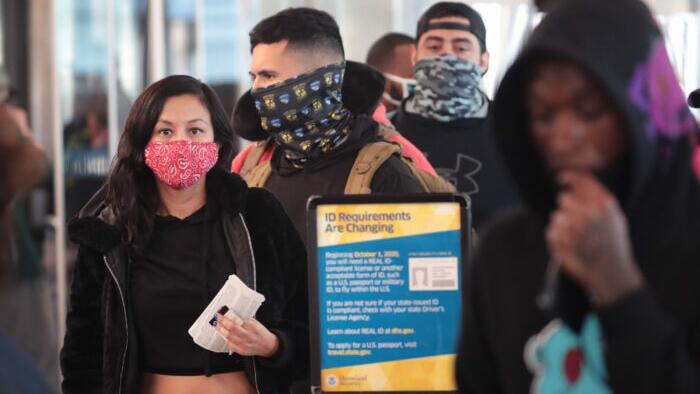 Authored by Matthew Vadum via The Epoch Times,

The Supreme Court refused to hear an appeal on Oct. 31, leaving in place a federal appeals court ruling that allowed the Transportation Security Administration (TSA) to require the wearing of masks on airplanes, trains, and buses during the COVID-19 pandemic.

Although the TSA abandoned its mask mandate in April, the decision allows a Dec. 10, 2021, ruling by the U.S. Court of Appeals for the District of Columbia Circuit to remain on the books as a legal precedent that the government may rely upon in the future.

In a brief filed with the high court on Sept. 27, the Biden administration urged the Supreme Court to reject the case.

U.S. Solicitor General Elizabeth Prelogar noted in the document that the TSA had announced on April 13 that it would extend the mask directives through May 3, 2022.

But days after the announcement, when a federal district judge in Florida vacated the Centers for Disease Control’s order requiring masking at transportation hubs and in airplanes, the TSA backed out of its mask mandate extension.

The TSA mandate was allowed to expire on April 18.

The D.C. Circuit Court’s ruling was correct because it recognized TSA was acting within its statutory authority and its actions were aimed at addressing the threats to transportation posed by COVID-19, the brief stated.

The high court refused to take up the petition filed in Corbett v. TSA (court file 22-33), without explaining why.

Justice Ketanji Brown Jackson did not participate in the consideration of the petition, but the court did not explain why she refrained from doing so.

Corbett argued that the agency’s authority under the federal Aviation and Transportation Security Act was limited to developing policies and directives aimed at guarding against violent attacks on transportation infrastructure.

The statute did not empower TSA to do things like require mask-wearing to protect public health, he argued.

But the appeals court disagreed.

“The COVID-19 global pandemic poses one of the greatest threats to the operational viability of the transportation system and the lives of those on it seen in decades,” the circuit court ruled in an opinion written by Judge Harry T. Edwards, who was appointed by then-President Jimmy Carter in 1980. One judge on the three-judge panel dissented from the ruling.

“TSA, which is tasked with maintaining transportation safety and security, plainly has the authority to address such threats under” the Aviation and Transportation Security Act.

Congress granted the TSA “broad authority” to analyze potential risks to aviation and national security and respond to those risks and conferred upon the agency “an expansive power to act in relation to the transportation system during a national emergency.”

Given the language in the statute, “it cannot seriously be doubted that Congress’ delegations of authority to TSA authorize the Mask Directives issued to contain the spread of the COVID-19 virus.”

If Congress wanted to limit the reach of the TSA it could have done so, but instead it “selected broad language in its mandate to the agency.”