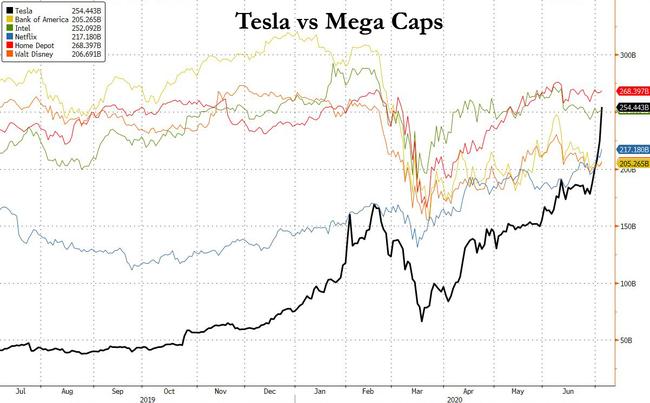 With Tesla surpassing the market cap of every single auto market in the world last week, including Japanese giant Toyota, which in 2019 sold 10.6 million cars compared to Tesla’s 367,500, Tesla has continued its relentless, steamrolling ascent, and with its stock rising as high as $1,400 after hours, its market cap is now well over $250BN (increasing by $50BN in just a few days), having exploded from $1,000 to $1,400 in 5 short days and 5 stock squeezes.

While we won’t comment on this absolutely farcical price action driven by the trillions in liquidity unleashed by central banks in what can now be simply called “banana marakets”, we will highlight some statistics: with its market cap of $254 billion as of the close of Monday, Tesla – which still does not trade on the S&P500 due to not meeting the S&P’s positive net income requirement – would be 15th largest company in the S&P500.

And since we expect Tesla’s insane ascent to continue soaring for the rest of the week as there is clearly nothing that can stop it, Tesla will surpass the largest US bank, JPMorgan ($283BN), and the largest US health insurance company, UnitedHealth ($283BN) in the next day or two.

Once it is done with those, it will then overtake Procter & Gamble ($300BN), Mastercard ($304BN), and Walmart ($338BN). After that it’s all clear to surpass Berkshire with its mere $434BN in market cap, at which point Tesla faces the FAAMGs, starting with Facebook at $665BN, and then all that will prevent Tesla from becoming the world’s most valuable company (without a profit) are Google, Amazon, Microsoft and Apple, all of which have a market caps above $1 trillion.