Texting Is Alive And Well At 30 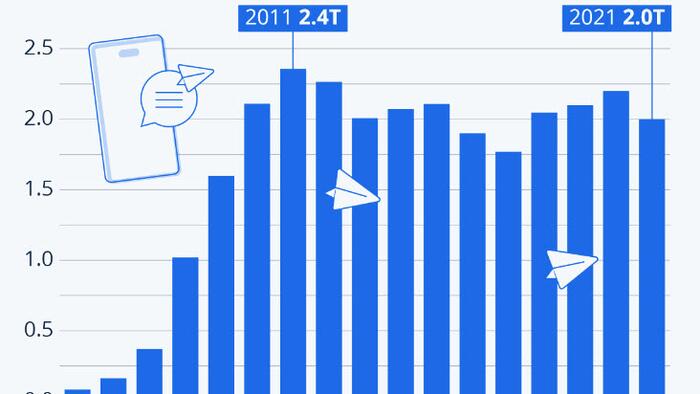 30 years ago, on December 3, 1992, the English software engineer Neil Papworth used his computer to send a message to Vodafone director Richard Jarvis. The message simply read “Merry Christmas” but it became known as the first SMS message ever sent, because Jarvis received the slightly premature Christmas greetings on his clunky Orbitel 901 cell phone. He never replied.

As Statista’s Martin Armstroing notes, it took a while for text messages to really take off, but in the early 2000s texting really hit the mainstream and became a very lucrative side business for mobile carriers around the world.

At the time, operators typically charged a fee of $0.10 to $0.20 per SMS, which, considering the 160 character limit, quickly piled up for more chatty users.

As Armstrong shows in the chart below, text messaging (including MMS) in the United States peaked in 2011, when U.S. cell phone users sent a total of 2.4 trillion messages, up from 162 billion five years earlier. Over the proceeding few years however, the popularity of text messages, at least in the form of SMS, began to wane.

These days, smartphone users mainly text each other using free SMS alternatives such as iMessage or WhatsApp.

That said, the good old-fashioned SMS is still clinging on to its relevance, with somewhat of a reprisal in recent years in the U.S. and a solid 2 trillion sent last year.