The Celestial Zoo: Mapping The Objects In Our Universe 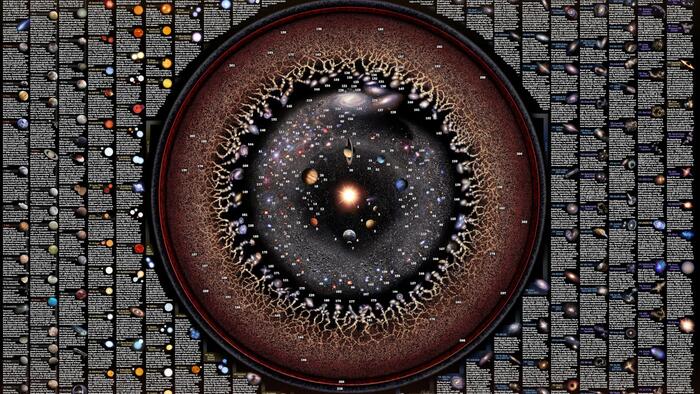 Humans have been observing the universe for thousands of years.

And, as Visual Capitalist’s Carmen Ang details below, while we haven’t figured out all the answers quite yet, we’ve made some remarkable discoveries when it comes to learning about outer space.

What are some of the most notable observations that scientists have discovered so far? This map of outer space by Pablo Carlos Budassi highlights more than 200 celestial objects in our universe and provides details and facts about each one.

The Types of Celestial Objects Mapped

To create this graphic, Budassi used a combination of logarithmic astronomical maps from Princeton University, as well as images from NASA.

The visualization highlights 216 different celestial objects that are color-coded and organized into five overarching categories:

At the center of the map is the Sun, which is the largest object in our Solar System. According to NASA, the Sun’s volume is equivalent to 1.3 million Earths. The Sun is the powerhouse of life here on Earth—its energy provides our planet with a mild, warm climate that keeps us alive, keeping the Earth from becoming a frozen rock.

Proxima Centauri, as the Latin name indicates, is the closest of the three to Earth and has an Earth-sized planet in its habitable zone.

The Life of a Star

In a star’s early stages, it’s powered by hydrogen. However, when its hydrogen stores are depleted, some stars are able to fuse helium or even heavier elements.

Stars similar to the size of the Sun will grow, cool down, and eventually transform into a red giant. The Sun has about 5,000 million more years before it reaches its red giant stage, but when that happens, it will likely expand to the point where it swallows up the Earth.

While stars emit energy for years, it’s important to note that they don’t shine for eternity. Their exact life span depends on their size, with bigger stars burning out faster than their smaller counterparts.

But as light from distant objects millions of light-years away takes a long time to reach us here on Earth, the largest of stars shine for hundreds of millions of years after they die.

Just How Big is Our Universe?

Some experts believe that the universe is infinite, while others argue that we can’t yet know for certain because current measurements aren’t accurate enough.

But just how much of the universe extends beyond what we can see? We may never find out.