The Execution Of Our Free Speech – Ben Garrison Cartoon 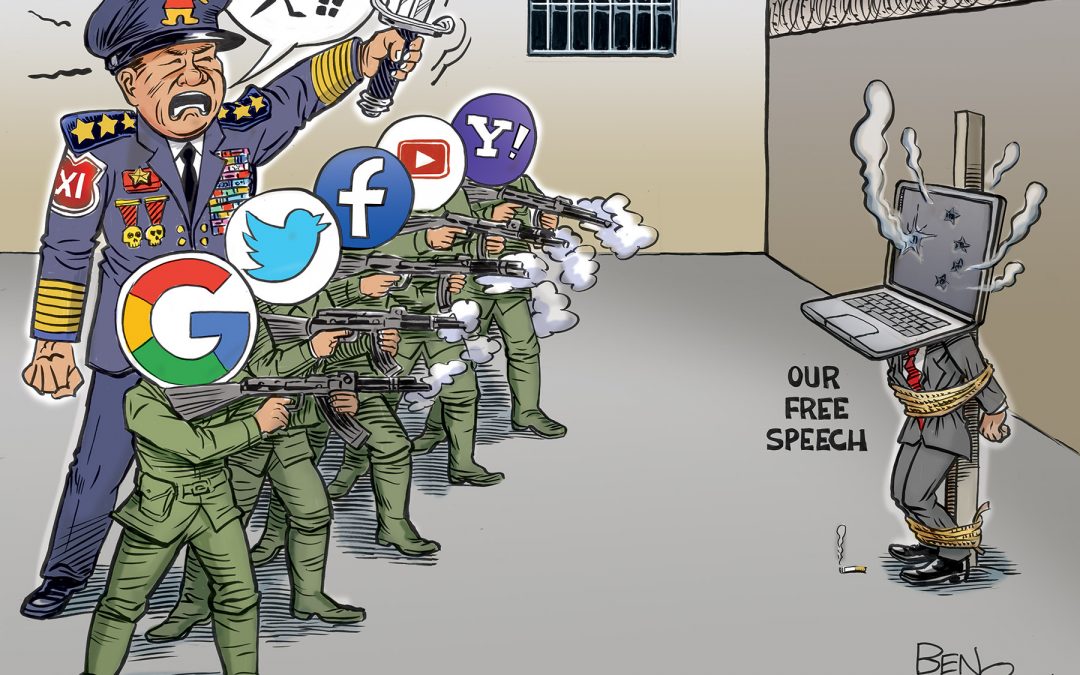 The Silicon Valley billionaires who control social media want to control our free speech. Not all of it…we are still free to talk about our pets, our favorite drink or restaurant, or post pictures of our vacations.

We simply can’t post anti-Deep State views about politics. We especially can’t question the medical tyrants who own and control ‘science.’ We could get banned for that! Questioning state authority could lead to a gulag for Chinese citizens. American citizens get warned, banned, or deleted. The Silicon Valley billionaires are part of the Deep State and we aren’t allowed to criticize their state. They are in alignment with Communist China, whom they admire. They all want a social credit system and a cashless society in order to bring more power and control.

I got my first rude awakening about censorship when I wrote an email to a friend in Germany. I was using Yahoo mail as a backup. For many years I traded occasional emails about classical music and culture with him. This time I typed an email concerning the corona virus and I expressed some doubt about what our ‘authorities’ had been asserting. I sent the email and a few minutes later it got kicked back to me by Yahoo. They said my mail had been censored for spreading ‘misinformation.’ That’s hard core censorship. It was as if the Post Office had opened my private mail, and returned it as undeliverable because the post master didn’t agree with my opinion. Shortly thereafter, Yahoo banned all commentary to their news stories. I often skipped their biased stories and went straight to the comments. Most of the commenters were onto the bias. So what did Yahoo do? They simply shut everyone up.

Since then, such censorship has become commonplace and growing steadily worse. Americans have not sufficiently pushed back. Many simply accept getting silenced as a new reality. Our Fourth Amendment has been obliterated and now the First Amendment has been under assault. We are no longer allowed to assemble unless we are socialist protestors. Mandatory vaccines are on the horizon. If we speak out against it, we’ll be censored. Joe Biden is owned by China, but our watchdog media has stood down. Not only aren’t they investigating Joe’s obvious corruption, they’re helping ban those who do. Adam Schiff says it’s all Russian propaganda. How long will the Deep State keep resorting to that canard? It doesn’t matter if we believe it or not, as long as we are rendered quiescent as they murder our free speech.

Welcome to the United States of Communist China.