The Great Election Fraud of 2020 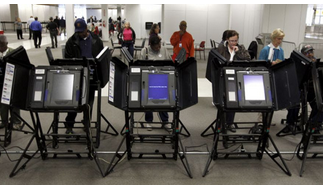 Prior to the present crisis, very few Americans had ever seen the true extent of leftist corruption, and fewer still had been on the receiving end of it. I am one of them, along with many more famous constitutionalists such as Gen. Michael Flynn, Justice Brett Kavanaugh, Justice Clarence Thomas, Robert Bork, Anita Bryant, and many others.

We each have been targets of the two-punch Saul Alinsky Method: 1) character-assassination (The Smear), plus 2) personal destruction (The Beheading), having been put through this Marxist meat grinder as punishment for refusing to back down from our principles on some matter of central importance to the leftist agenda. In my case, it was working internationally to stop the normalization of “gay marriage,” for which I suffered The Smear at the hands of the Human Rights Campaign and their dossier funded by billionaire Paul Singer, and The Beheading at the hands of a Manhattan-based Marxist law firm, The Center for Constitutional Rights, which prosecuted an outrageous and bogus “crimes against humanity” lawsuit against me in the U.S. federal courts for six and a half years.

(For the record, I hold genuine Christian love in my heart for those who struggle with same-sex attraction disorder, have never advocated or condoned hatred or violence against them, and support the inclusion of truly conservative homosexuals in the conservative movement who keep their lifestyle private and aren’t actually just Trojan horses trying to advance various aspects of the progressive cultural transformation strategy called “Queer Theory.” They are always, of course, accountable to God for their private lives, but only accountable to the rest of us if they push a destructive agenda publicly.)

Alinsky taught the left to 1) pick a target to be the symbolic stand-in for all like-minded people, 2) turn that person into a despicable villain in the mind of the public through sustained propaganda, reinforced by continual universal condemnation from all corners of the leftist-controlled world, and 3) destroy that person in as spectacular a fashion as possible as a warning to everyone else.

Some, like myself, survived it pretty much intact (thanks to many prayers and the intervention of the heroic Christian lawyers at Liberty Counsel, who spent around $1.5 million to successfully defend me). Others have never recovered public respect – essentially being “beheaded” for lack of sufficient conservative support during their ordeal.

I broke out of the Alinsky Box the left had me trapped in by running for governor of Massachusetts in 2014 and 2018. The only way to escape Step 2 of the Alinsky process is to do something bigger than the leftist media are able to control through the spin and/or suppression, and thus earn oneself a platform for speaking to the public directly. My audacious counter-offensive in running for governor ensured my ability to speak directly to the public and let them see the real me in contrast to the false caricature the left had created of me to pre-poison the pool of potential jurors I would have eventually faced in court if their conspiracy had run its full course.

I’ve said all this to establish my street-cred behind my assertion that the left’s present assault on President Trump, which includes but is not limited to the most extensive and consequential voter fraud conspiracy in the history of the world, is truly corruption of biblical proportions. And that it is following the exact same Alinsky method – except on a scale never seen before.

Of course, Donald Trump IS the worldwide symbol of populist conservative resistance to elite leftist globalism. He represents an existential threat not just to their agenda but to their mostly hidden but deep-rooted and pervasive system of world control.

Even before Trump’s election victory in November 2016, the left worked relentlessly to cast him as a despicable villain deserving of scorn and hatred, a Hitleresque racist bigot, etc. – all the standard bile, but at its highest concentration and volume. By extension, we Trump supporters became “Deplorables” per Hillary’s declaration at her LGBT for Hillary mega-fundraiser.

And since the 2016 election, the vast network of Marxists controlling the large majority of our cultural and political institutions have devoted themselves to destroying Donald Trump in the most spectacular manner possible. To that end, their conspiracy has grown over time in scope and ferocity as each successive effort has failed.

I speak often about the spiritual-warfare principle of standing firm for truth. When one stands firm on an issue of central importance to the Satanic agenda in a manner that genuinely threatens that agenda, he will assign greater and greater forces against you until eventually they are all arrayed on the battlefield where all people with spiritual discernment and the willingness to look can see them. That happened in Oregon on a statewide scale in 1992 during my Ballot Measure 9 efforts. It is now happening on the grand national scale in the battle against the Great Election Fraud of 2020.

The height, breadth, length, and depth of the American left’s criminal conspiracy to steal the presidency and nullify our Constitution is unparalleled in our history and ranks with the many stories in the Bible when corruption was so pervasive in the elite strata of government and the clergy that there seemed no hope for its overthrow.

We are truly witnessing corruption of biblical proportions that God alone can deliver us from. We don’t yet know how this struggle will end, but we do know that He has empowered President Trump and a massive MAGA army of constitutionalists to wage war in the cause of truth in a manner unseen since the founding of this nation.

President Trump broke the Alinsky Box by turning out a Red Tsunami of freedom-loving voters on Nov. 3, and I believe that if we all press in and fight like tigers to defeat the leftist coup, we WILL save this nation and smash the domestic and foreign enemies behind it.