The Most Ridiculously Perfect Meme to Sum Up FISA-Gate 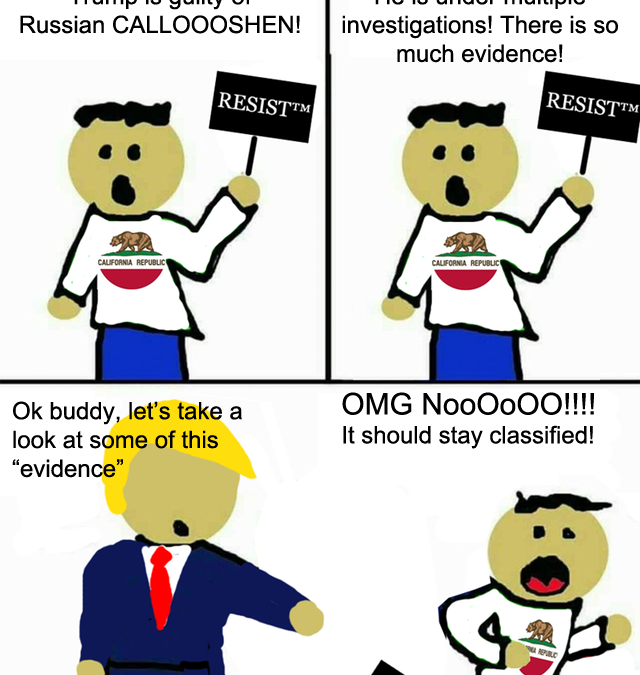 As an American, let me say,there are plenty of you out there doing plenty of embarrassing things that the rest of us will have to pay for for years to come.

We’ll likely chalk it up to political correctness run amok, ironically.  The liberal left wanted this.  They practically begged for it.  This conflict is all their own, yet, they seem to be blindsided at every turn.  They exhibit the grace of a hiccup during a bout of food poisoning.  That is to say; they are wholly unpleasant. They wanted a level playing field for those hadn’t earned it, and when their factions were dismembered at the fates of Twitter and Reddit, they correctly cowered in fear.

Now, as President Donald Trump readies himself to plow headfirst into the history books, perhaps at the the peril of the very nation of which he is Steward-in-Chief, one simple yet clever meme has summed up the chaos we face.

Yes:  This is ostensibly silly, but, in its inert and harmless veil it becomes powerful.

Satire is often its most poignant when the tribulations of adulthood are portrayed against the backdrop of prepubescent existence.  This has been true in America from the heyday of the Peanuts comic strip, through over two decades of South Park.  This is the common denominator that at once embarrasses us and enlightens us, reminding us oh so subtly that we’ve already solved these issues as children.

Here, in these 3 panels, we get a glimpse of the reality that lies beneath the leftist hysteria.  And, in doing so, are able to pinpoint the madness to avoid.

How could anyone be afraid of the truth is they proclaim sincerity and conviction in their cause?  If the left doesn’t have the courage to stand behind their accusations, are those accusations even valid?

We have a busy week ahead of us, folks.  We’ll have plenty of time to sort this out.

The post The Most Ridiculously Perfect Meme to Sum Up FISA-Gate appeared first on The Constitution.