THE QUEEN SMACKS DOWN the arrogant Muslim Mayor of London 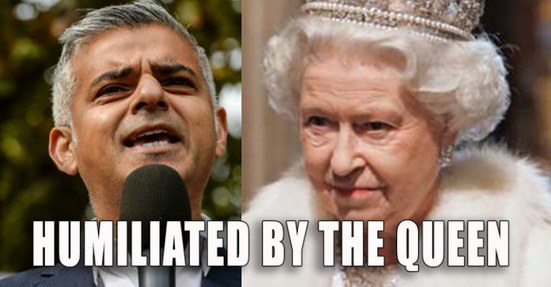 Truthfeed  Soon after demanding that Trump to be banned, Khan’s threat has been quickly debunked by the Queen of England herself. She has declared she will be meeting with President Trump whether the delusional Muslim mayor of London likes it or not. Khan truly does not know his place and has spoken many times as if he speaks for the U.K.

Shortly after he took office in January, President Donald Trump hosted U.K. Prime Minister Theresa May, who offered an invitation in kind for Trump to visit Britain and meet with Queen Elizabeth in October.

However, following a heated feud between Trump and London Mayor Sadiq Khan, regarding recent terror attacks in London, Khan called for PM Teresa May to cancel the president’s visit with the queen. Unfortunately for these Trump-haters, the British government has reiterated and confirmed the invitation to Trump, AFP reported.

Trump seized on Khan’s remark that there was “no reason to be alarmed” at the increased presence of armed police officers in the city streets, by criticizing Khan for allegedly attempting to downplay the seriousness and alarming prevalence of Islamist terror attacks throughout the U.K.

Regardless of Trump and Khan’s squabble, the Queen appears to be good and ready to welcome Trump to the British nation. If Trump’s past interactions with world leaders are any indication, the meeting should go very well indeed.

No, Khan, three Islamic terrorist attacks in just three months in your country have proven that Trump’s view of Islam is spot-on.