The Rise (Or Fall?) Of Vegetarianism 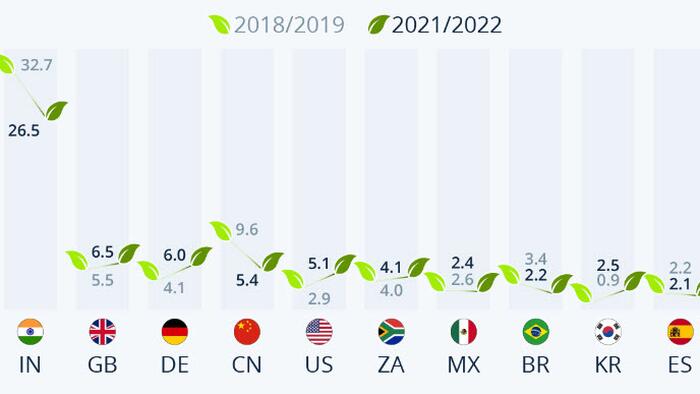 Whether vegetarianism is pursued with the aim of protecting animals, preserving environmental resources, leading a healthier life or because of cultural traditions, the practice can have a profound influence on health and carbon footprints.

As Statista’s Katharina Buchholz notes, while vegetarianism is expanding slowly in several countries around the world, for example in Europe or the United States, large emerging economies are doing it the other way around. Here, vegetarianism is in decline – for example in India, where traditional vegetarian diets are increasingly swapped for an omnivore approach to eating.

While in 208/19 around a third of urban Indians said they were vegetarians, this decreased to approximately one quarter by 2021/22. This is according to the Statista Global Consumer Survey...

Vegetarian diets have become more popular in the last three years overall, but some countries are more steadfast than others in their love for meat.

In Mexico and Spain, the rate of vegetarians hovered below 3 percent most recently. The same is true for South Korea, even though here, the rate vegetarians rose from an extremely low 0.9 percent in 2018/19.