They Won’t Leave Us Alone: The Invasion Of Politics 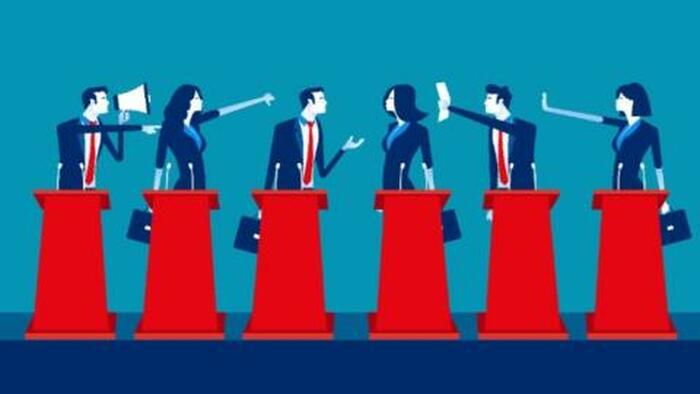 Authored by Joakim Book via The Mises Institute,

The temptation and crucial flaw of a totalitarian mind are that everyone must play a part in a superstructural battle between good and evil. Standing on the sidelines or taking a neutral position on present topics is not allowed; one may not merely observe or ignore the madness played out among the power hungry.

As a not-so-proud carrier of a Swedish passport, I last year lost track of how many times I was asked about Sweden’s membership in the North Atlantic Treaty Organization (NATO), the overreaching military alliance among Western nations. Apparently, there was a war going on somewhere. NATO countries were scrambling, and Finland and Sweden (thoroughly Western social democratic countries) were decades-old NATO holdouts. I did not know; I took pride in not knowing.

The chattering classes and the corporate press were full-on politicking. An insider-diplomacy battle raged between Stockholm, Helsinki, and Washington, DC. At some point even, Ankara, Turkey, was involved. I did not know; I had no opinion. My friends, my colleagues, my neighbor, my barber, my friends’ friends, and various other acquaintances all wanted in on the sordid business of political commentating.

I did not know. That was exactly it. I had no position to offer, which I quickly realized was a social mistake in this brave new world of symbolic wars for all that is “good.” I did not know anything about military matters, defense capabilities, international relations, or threat assessments regarding the various countries involved. I did not live in any of the places previously mentioned. I had no interest in their nation-state status. I did not know what the implications of NATO membership were or why it concerned me. Politicians politick with or without my input.

Everyone needs a take; everyone needs to “be informed” on the grand, irrelevant events of our broken times. Everyone needs a flag in their profile picture—a not-so-grand gesture indicating that they support the “latest thing.”

Paraphrasing Murray Rothbard’s quote on economic ignorance, why should I politick “a loud and vociferous position” on the diplomatic/military questions that so many of my fellow humans keep asking me for?

On most current affairs, I imagine I am a little bit like most people; we have our own lives and our own interests to pay attention to. Everything else takes a backseat. Rather than play the hot-take-on-everything game, I just want to be a good libertarian and be left alone. Unfortunately, that does not fly in a politicized society flirting with totalitarianism. Society has lost its shared values and its unifying religious frameworks and instead elevated politics (as Friedrich Nietzsche’s old quote goes, “God is dead. . . . And we have killed him”).

F.A. Hayek taught us in his famous 1945 “The Use of Knowledge in Society” that market prices carry information. I do not need to know anything about faraway affairs. I am perfectly capable of reading gasoline prices, suffering electricity price shocks, or paying elevated prices at the grocery store. That is the beauty of a capitalist division of labor and a market system. We do not need top-down control. We do not need the chattering classes opining about what one owes, deserves, or ought to know. All we need is the reality of what we experience as market actors.

Like a good libertarian, I instead try to purge politics from my life; no watching the news. I only read slow news in quality magazines by authors I trust, and I routinely skip every topic that does not belong to my core interests. Life is too short. And as I have said in the past, the sum of “humanity’s current (and future) literary, statistic and economic treasure” is more valuable than the unexciting, outdated information that is tumbled, diluted, and filled with omissions, via my propaganda machine (sorry, TV news).

In what political scientists would consider apex “political ignorance,” I take pride in not being able to name the prime minister of my native Sweden or the rulers of the other lands in which I reside. I do not know, care, or want to elevate their theater into my cognitive space.

At a recent party, my team lost a trivia competition, partly because we could not name the United Kingdom’s last three prime ministers (They change so often that it is not worth learning their names.). When my father called on an eventful Sunday last fall, and in passing, mentioned that he had met an acquaintance at the voting booths, I learned for the first time that it was Election Day. Epic!

Twenty-five years ago, James Dale Davidson and William Rees wrote about the public’s relationship to politics and corrupt institutions in their long-lived treatise The Sovereign Individual:

Moral outrage against corrupt leaders is not an isolated historical phenomenon but a common precursor of change. It happens again and again whenever one era gives way to another. . . . This widespread revulsion comes into evidence well before people develop a new coherent ideology of change. As we write, there is as yet little evidence of an articulate rejection of politics. That will come later. It has not yet occurred to most of your contemporaries that a life without politics is possible. (emphasis added)

Foreshadowing the rise of internet dominance, remote work, financial revolutions, and Bitcoin, the authors precociously reasoned about big-picture societal shifts of power. When technology allows, new societal constellations become available. Whether or not we grab onto them is up to us.

And all meaningful changes begin at home: fix that which you can fix, clean your room, etc. A flourishing future without politics requires us to purge from our lives the corrupting features of politics, which only enrage us and separate us from our fellow humans.

Politics is cancer, and the best you can do is to exit from it in every way you can.