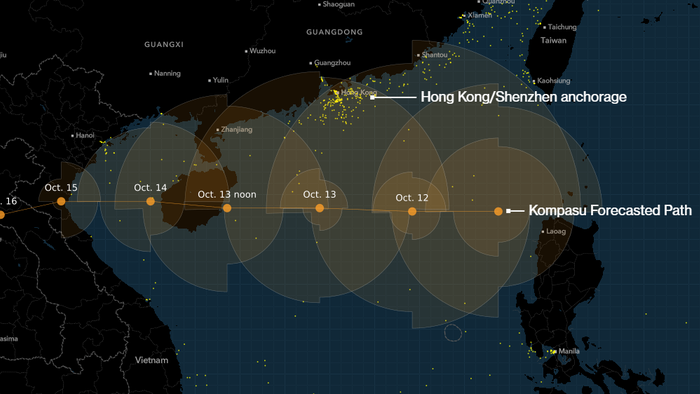 The number of container ships at anchor or drifting at one of the busiest ports in China has jumped to the highest level since August, indicating supply chain disruptions will continue into the holiday season. Right now is the critical period where US importers build inventory for Christmas shopping. If they fail to do so, expect shortages of popular consumer goods.

China’s Yantian port in Shenzhen has had its fair share of issues this past summer, primarily due to a COVID outbreak forcing one of its terminals to shutter operations. Since then, the terminal has reopened.

“Kompasu is the second tropical storm to affect southern China in the last few days, after Lionrock brought flooding to some low-lying areas of Hong Kong over the weekend. The damage from Kompasu could be more severe based on its current track and intensity forecasts,” Bloomberg Intelligence analyst Steven Lam wrote in a note Monday.

On the other side of the Pacific, just weeks ago, the number of container ships at anchor in San Pedro Bay off the ports of Los Angeles and Long Beach reached a record high of 73 vessels.

It’s still impossible to ignore the current shipping crisis. The common view is that COVID has played a significant part, but there are many other factors, such as weather-related challenges at ports as well as the recent blackout-induced factory shutdowns.

However, there is good news, and we were one of the first to observe what appears to be a peak in shipping rates in early October, noting that there was a “glimmer of hope” for global snarled supply chains, even if the rebound will likely prove to be far more painful.

To sum up, don’t wait until the last minute to do your holiday shopping because the growing shortages of consumer goods means you will probably find what you are looking for some time in 2022.