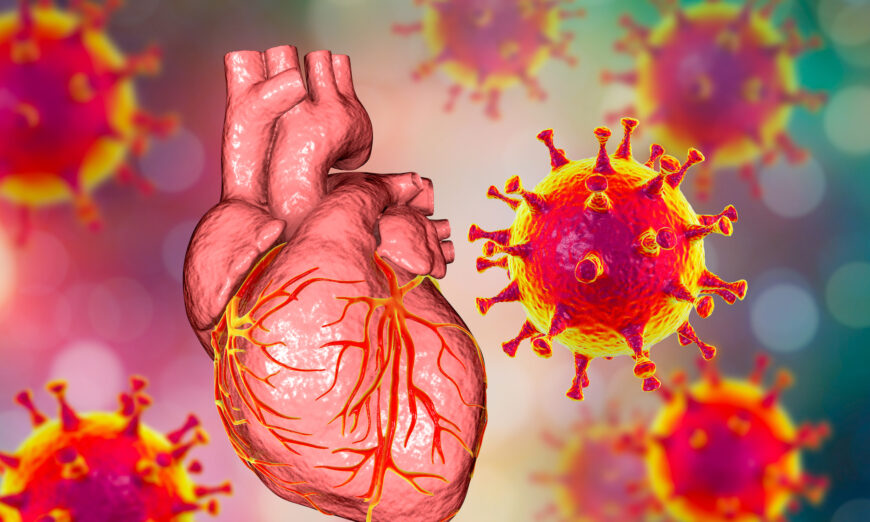 Another one of many young males mislead by health authorities

It is my honor to reprint the following article by permission of the author.

Vaccine myocarditis is not trivial, mild, or “rare.” In young men, it’s a far greater risk than Covid hospitalization and death.

On May 12th of last year, school teacher Emily Jo took her 14-year-old son Aiden to get his first Pfizer vaccine dose. The public health authorities and her son’s pediatrician unanimously recommended vaccination, prompting her decision. She knew that mRNA shots caused some number of adverse events, like all vaccines, but was re-assured by the CDC and White House’s public recommendation.

“The talk amongst the mainstream medical community was that vaccine myocarditis was mild and that this was very rare,” she told me.

At that time, despite alarming heart inflammation reports from Israel, the CDC publicly claimed to have found no signal of myocarditis after “intentionally” investigating over 200 million administered doses.

Moreover, Emily Jo was never warned of the myocarditis risk or informed about the risk-benefit profile.

“When I took Aiden to get his vaccines at the drive-through vaccination site, there was no warning about myocarditis. We were not counseled about any side effects to be aware of,” she said.

In the name of public safety, scientific innovation, and personal health, Emily Jo sent out a celebratory tweet proclaiming she and her family are “so thankful” their teenage son was able to get vaccinated.

However, her pride and relief turned out to be tragically short-lived. Two days after her son’s second vaccine dose (which he got a month after his first), he ended up in the hospital after experiencing intense chest pain. He was moved to a room on the acute cardiac floor where he was found to have elevated troponin levels (a key sign of heart damage) and an abnormal electrocardiogram. Every doctor Emily Jo spoke to at the pediatric hospital Children’s Healthcare of Atlanta confirmed her son had vaccine-induced myocarditis.

Given her son’s dire condition, Emily worried Aidan might die or suffer from a catastrophic injury. Thankfully, after four distressful days at the hospital, Aidan troponin levels returned to baseline and he was discharged. However, this didn’t mean he could return to his normal life. Aidan was unable to do physical activity for six months. Sports, hikes, and other forms of exercise were deemed too dangerous for his heart — a typical consequence of myocardial injuries.

“I had no idea how life altering ‘mild’ myocarditis actually is. I have a very hard time with the label ‘mild’ for anything that requires hospitalization and months of inactivity,” Emily Jo said.

The most serious concern with Aidan’s vaccine injury isn’t the harrowing experience itself, but the frequency at which it occurs. Virtually any substance or medication will produce a diverse range of reactions across the human population. As Sam Harris has correctly noted, if you administer peanuts to everyone, there will be some number of fatalities and cases of anaphylaxis.

The rare incidence of life-threatening anomalies doesn’t mean that peanuts produce a net harm or should be banned altogether. Tragic interactions with any kind of externality are often exaggerated and exploited to justify irrational ideological agendas. For example, Minneapolis officer Derek Chauvin’s treatment of George Floyd paved the way for radical “Abolish the Police” initiatives.

In the case of COVID-19 vaccines causing myocarditis, we aren’t dealing with trivial ratios of one in a million or even one in ten thousand. Among the most robust data we have—according to Dr. Tracy Beth Hoeg (Florida Health department) and Dr. Marty Makary (Johns Hopkins University)—is from Dr. Katie Sharff (who had her young son vaccinated) and colleagues, who analyzed a wide database from Kaiser Permanente.

Going beyond other study methods, Sharff found a number of vaccine myocarditis cases that weren’t explicitly labelled as such or were outside the parameters of the CDC’s vaccine safety search. After performing an exhaustive search of the Kaiser medical records, Sharff and colleagues found a 1 in 1,862 rate of myocarditis after the second dose in young men ages 18 to 24. For boys ages 12 to 17, the rate was 1 in 2,650. Countries with active surveillance monitoring of medical data (which suffer from far less under-reporting than the passive system in the U.S)—such as Hong Kong—show virtually identical figures. The risk of vaccine-induced myocarditis remains elevated for men up to the age of 40. 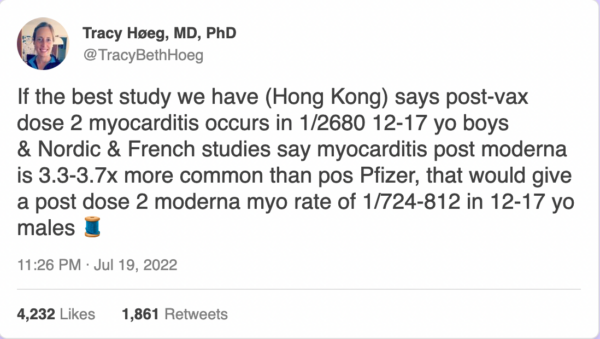 One need not be an anti-vaccine conspiracy theorist to recognize these figures are alarmingly high.

Historically, vaccines with adverse event profiles far lower — but still deemed far too high — than the mRNA myocarditis signal have been withdrawn. The 1976 swine flu vaccine was pulled back because of a 1 in 100,000 risk of Guillain-Barre Syndrome.

An approximate 1 in 3,000 risk of vaccine myocarditis in young males would only be favorable in a cost-benefit analysis wherein the risk of disease would be considerably serious.

The pre-vaccine Covid infection fatality rate for people under 30 was 0.003%.

The vaccine myocarditis risk after dose two (0.03%) is ten times higher than the fatality rate.

Today, since the vast majority of young Americans have been previously infected with Covid once or twice, the calculus has shifted. Putting aside the question of whether it makes sense for unvaccinated people to get the primary series targeting outdated variants, the myocarditis risk (in young males) from even one dose eclipses that of hospitalizations from re-infection. Josh Stevenson — a data analyst who has co-authored multiple peer-reviewed studies on vaccine myocarditis — has designed the following bar graph comparing risks: 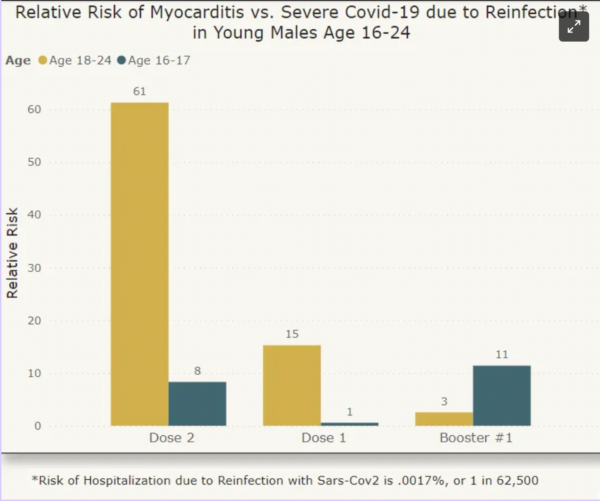 Using Covid hospitalization statistics instead of deaths is a more accurate comparison since Covid deaths are virtually nonexistent in healthy, young populations. Still, the differences are massive. For example, the risk of myocarditis from dose one in males ages 18-24 is 15 times higher than hospitalization from Covid re-infection. For dose two, the risk differential is a stunning 61 times greater.

Unless a young male is immunocompromised, obese, or suffering from other serious health conditions, taking any mRNA Covid vaccines carries far more risk than benefit. The best data indicate this is a fact — though this is hardly considered in mainstream media.

Cases such as Aidan’s have prompted many honest voices in the public health community to reflect on the CDC’s top-down vaccine recommendations. Dr. Anish Koka—a renowned cardiologist with his own clinic in Philadelphia—believes medical experts should have been “more careful about recommending this to low-risk patients from the very outset.”

As he explained to me over email, “Clinical myocarditis is never mild—a recent paper of 12–29-year-olds found 25% of myocarditis patients end up in the ICU, and 1 patient needed ECMO (a modified heart lung machine) to stay alive.”

“The long term impacts of the persistent scars that are apparent in follow-up on cardiac MRI are also unknown,” he added.

Koka believes it was “apparent by April (of 2021) there was a real safety signal,” and he questions why public health authorities “didn’t make decisions starting then to at least inform the public about this potential side effect at that point. ”

Instead of mitigating risks by further spacing vaccine doses, recommending Pfizer over Moderna, and being honest about near-zero risks of severe outcomes in younger, healthy groups, Big Pharma in collusion with the government recklessly opted for universal decrees.

Looking back on the CDC and Food and Drug Administration’s (FDA) possible negligence and recklessness, Khoka stated the harm perpetrated was “unconscionable.”

More and more medical professionals are now speaking out on the strong likelihood that vaccine-induced myocarditis seems to occur at a rate that far exceeds deaths and hospitalizations in healthy, naturally immunized men under 40. Johns Hopkins public health professor Marty Makary recently wrote in a tweet:

“Last y[ea]r, the NEJM described a 22-yr-old that died from vax-induced myocarditis & I’ve heard of many more cases. I have never heard of a young healthy person with nat[ural] immunity dying from Covid. Our gov’t doctors have not been honest about the risks:benefit in young healthy people.” 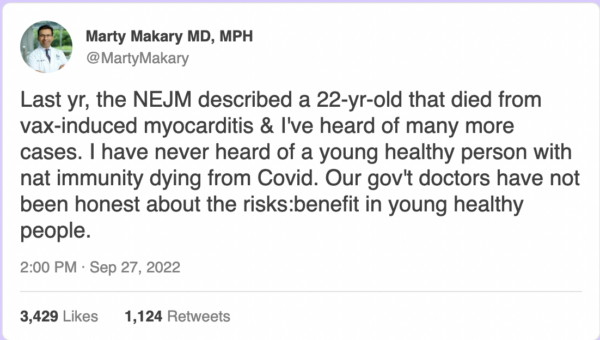 I had been frankly hesitant to make such a statement since it isn’t scientifically rigorous, but since this topic is becoming less taboo, I will say it now: I have heard (without deliberately seeking) of several vaccine myocarditis cases in healthy, young people but have heard of zero hospitalizations and deaths.

This observation is in line with real-world statistics. According to UK data before Omicron—when the virus was deadlier—the COVID-19 death rate was just over 0.001 percent in unvaccinated 30-year-olds. For unvaccinated people in their 20s, the risk was more like 0.0001 percent. Hospitalization figures (from, not with COVID-19) are similarly infinitesimally low. Compare that with a vaccine myocarditis risk of 0.03 percent in young men.

It makes little coherent sense why young males were not only permitted and recommended to get the mRNA vaccine series, but mandated by the state (as I wrote at length here). This injustice is even more egregious now that we know vaccines confer little to no long-term protection against infection.

Thinking about the fact that Aidan got myocarditis for 30.6% transient efficacy is pretty infuriating…This Pfizer vaccine was initially sold as 95% effective. Big change.

Fast-forward to today, Aidan is far from his physical condition before getting double-vaccinated. After advising him against even going on for a walk for the first four months post-vaccination — and eventually allowing a return to exercise after six months — Aidan’s cardiologist has cleared him for all physical activity. However, “he tires more easily and has lower endurance,” Emily says.

“He used to be able to run around and play for hours….now it’s like 20-30 minutes and he gets exhausted,” she added.

More than a year later, Aidan is still recovering from a vaccine that had little to provide him in the first place. Though some have shamed Emily for getting her son vaccinated, she is hardly to blame for trusting in taxpayer-funded health agencies whose sole function is to keep the public healthy and safe.

In light of the FDA and CDC’s outrageous push to vaccinate everyone with the new “bivalent” booster—despite explicitly “unknown” myocarditis risks—hopefully more people will wake up and re-evaluate their blind faith in institutions who have far abandoned their ostensible mission of keeping us safe and healthy.