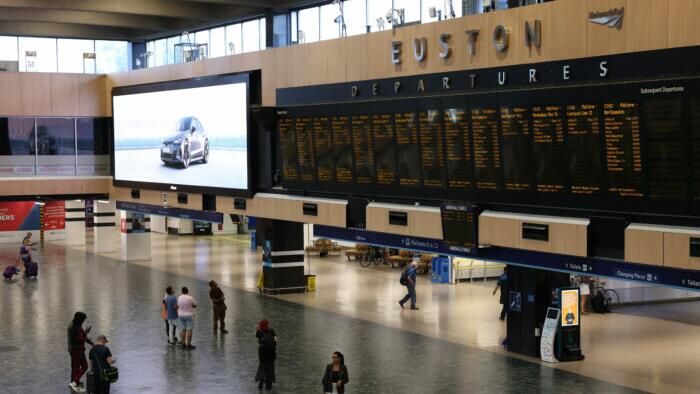 Authored by Alexander Zhang via The Epoch Times,

The UK government has put hundreds of soldiers on stand-by to cover for ambulance crews, firefighters, and Border Force staff as a wave of strikes are set to disrupt crucial public services in the run-up to Christmas.

According to the Cabinet Office, about 2,000 British military personnel, civil servants, and volunteers from across government have been training as part of the government’s contingency planning.

They include up to 600 armed forces personnel and 700 staff from the government’s specialist Surge and Rapid Response Team, as well as from other parts of the civil service.

The Cabinet Office said no decisions had been taken yet on the deployment of troops, but that they were part of the “range of options available” should the strikes go ahead as planned.

Conservative Party chairman Nadhim Zahawi said it is the “right and responsible thing to do” as ministers seek to minimise the disruption to the public.

A number of unions across public services are preparing to carry out strike action or ballot their members over pay disputes.

The National Health Service (NHS) is under pressure as ambulance workers in three unions voted last week to strike over pay and concerns about staffing levels. The Royal College of Nursing is also staging two strikes this month and junior doctors are set to be balloted on industrial action.

Meanwhile, more than 33,000 firefighters and control room staff started voting on Dec. 5 on whether to take industrial action over a 5 percent pay rise, which the Fire Brigades Union (FBU) said is “derisory.”

There is expected to be widespread disruption to transport in the run up to Christmas with further rail strikes, walk-outs by baggage handlers at Heathrow Airport, and possible action by Border Force staff.

On Dec. 4, the biggest rail workers’ union rejected an offer from train operators, which means the long-running dispute over pay, jobs, and conditions is set to continue.

The Rail Delivery Group (RDG) offered an 8 percent pay rise and guarantee of no compulsory redundancies before April 2024. But within hours of the offer, it was rejected by the Rail, Maritime, and Transport union (RMT).

Transport secretary Mark Harper said the union’s announcement was “incredibly disappointing” and was unfair to the public, passengers, and the rail workforce.

Appearing on the “Sophy Ridge On Sunday” programme on Sky News, Zahawi said that while he was “absolutely conscious” of how difficult it was for many workers, the country simply could not afford inflation or above-inflation pay awards.

“If you accept all the inflation-level pay rises, that is about £28 billion [$34 billion]. It would cost every household just short of £1,000 [$1,227]. That is unsustainable when we are trying to be fiscally disciplined and control inflation.”

Zahawi linked the strikes to Russian President Vladimir Putin’s war in Ukraine, as he urged the unions to drop their demands.

“We’re coming up to Christmas, it’s unfair, in my view, for the unions to really damage and disrupt people’s lives and livelihoods at Christmas,” he told the BBC’s “Sunday With Laura Kuenssberg” programme.

“They should really rethink and they should reflect on this because that is exactly what Putin wants to see, that division.”

Pat Cullen, general secretary and chief executive of the Royal College of Nursing, denounced his comments “as a new low for this government.”

“The public does not believe this kind of rhetoric and wants ministers to address our dispute,” she said.

“Record numbers of nurses are leaving because they feel undervalued and patients are paying the price.”

Sharon Graham, general secretary of the Unite union, said the minister’s attempt to paint nurses and ambulance drivers as “allies of Vladimir Putin” was “as ridiculous as it is disgraceful.”

“Rather than running down our NHS in an act of catastrophic self-harm and threatening to bring in the military, the minister should instead ask himself why health staff are leaving in droves,” she said.

Commenting on the public sector strikes on Dec. 5, Downing Street said it would not rule out expanding legislation on imposing minimum service levels on transport services during strikes, which the government introduced in October.

Prime Minister Rishi Sunak’s official spokesman said: “We are keeping under review what is the right balance with regards to strikes. We won’t hesitate to bring forward changes if we judge they are required.”

According to data released by the Office for National Statistics last week, 13 percent of British companies think they were affected by industrial action during October, with train strikes likely impacting companies the most.

The most impacted businesses were those in the sector titled “wholesale and retail trade, repair of motor vehicles and motorcycles.” More than 18 percent of these companies said they were impacted.

Accommodation and food companies were the second worst hit by the strikes, according to the survey.