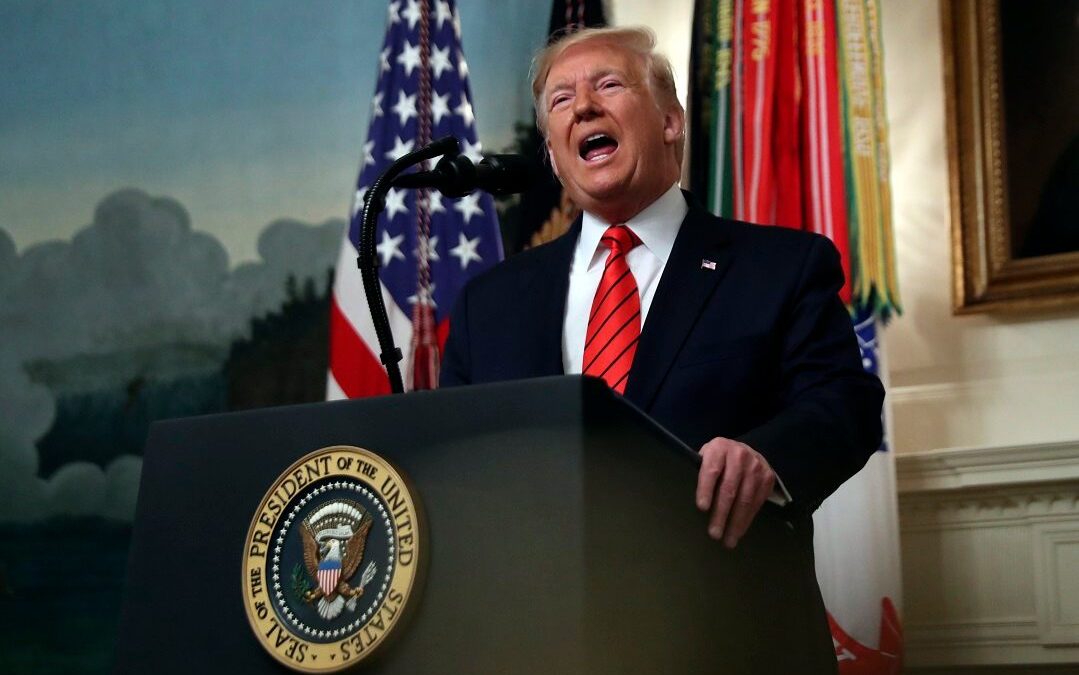 President Donald Trump told the Washington Examiner he may read aloud the transcript from his phone call with Ukrainian President Volodymyr Zelensky on Television, similar to a fireside chat.  (AP Photo/Andrew Harnik)

Good morning and welcome to Fox News First. Here’s what you need to know as you start your Friday …

Trump mulls FDR-like ‘fireside chat’ over Ukraine phone call
President Trump said Thursday he may read the transcript of his July 25 telephone conversation with Ukrainian President Volodymyr Zelensky aloud to Americans in the style of the famous fireside chats delivered by President Franklin Roosevelt during the 1930s and 1940s. “This is over a phone call that is a good call,” Trump said in an interview with the Washington Examiner. “At some point, I’m going to sit down, perhaps as a fireside chat on live television, and I will read the transcript of the call because people have to hear it. When you read it, it’s a straight call.”

President Franklin D. Roosevelt talks to the nation in a fireside chat from the White House in this November 1937 photo.

Roosevelt’s series of informal radio addresses, dubbed fireside chats, were meant to garner support for his New Deal policies and update Americans on the course of World War II, among other issues. A public reading of the call transcript by Trump would mark his latest effort to thwart congressional Democrats’ impeachment inquiry against him and sway public support in his favor. Click here for more on our top story.

Ex-White House official testifies he wasn’t concerned ‘anything illegal was discussed’ on Trump-Ukraine call
The president’s consideration of a fireside chat came amid two developments: A sharply divided House voted Thursday to approve a resolution setting “ground rules” for the impeachment inquiry into Trump. In addition, a top White House adviser on the National Security Council who recently resigned testified to the House impeachment inquiry that he was not concerned that “anything illegal was discussed” during the president’s call with Ukraine’s president. Still, Tim Morrison, whose resignation was first reported Wednesday, appeared to confirm details about Trump’s efforts to push Ukraine to investigate his political rivals.

Morrison — who handled Russian and European affairs for the NSC — was listening in on the call between Trump and Zelensky from the White House Situation Room, he acknowledged Thursday. His resignation takes effect on Friday. Click here for more.

Obama Clinton emails demanded amid Dems’ impeachment inquiry
Access to “all email communications” between former President Obama and Hillary Clinton was demanded Thursday in a letter to the U.S. National Archives and Records Administration. Sen. Ron Johnson, R-Wis., chairman of the Senate Homeland Security and Governmental Affairs Committee, said the messages could shed light on whether the former secretary of state discussed sensitive matters on her unsecured personal email system while she was overseas. In October, a State Department report into Clinton’s use of a private email server for government business found dozens of people at fault and hundreds of security violations.

Firefighters walks on a road leading to a residence as the Maria Fire burns on a hillside Thursday, Oct. 31, 2019, in Somis, Calif. (AP Photo/Marcio Jose Sanchez)

New fire erupts north of LA as city’s critical fire warning is extended, no rain in near future
A blaze dubbed the Maria Fire consumed about 5,000 acres in Ventura County north of Los Angeles on Thursday, the latest fire to ignite in the Golden State. Meteorologists warned there’s little chance that Los Angeles — which hasn’t seen significant rain in months — will see any in the next few weeks. “Luckily, we are not seeing any more Santa Ana winds within the next week,” one weather watcher told the Los Angeles Times.  The paper reported that critical fire weather warnings have extended through Friday.

In Ventura County,  authorities have ordered evacuations for about 7,500 people as the Maria Fire burns on a hilltop north of Los Angeles. The fire on South Mountain near Santa Paula erupted Thursday evening and quickly spread over 6 square miles as it was driven by moderate winds. Ventura County fire officials say it’s threatening the unincorporated community of Somis, which has about 3,000 residents.

Trump leaving New York, now calling Florida his new home
President Trump, a born-and-bred New Yorker, announced Thursday that he has changed his permanent residence to Palm Beach, Fla., because of the way politicians in New York City and the state of New York have treated him.

“I cherish New York, and the people of New York, and always will, but unfortunately, despite the fact that I pay millions of dollars in city, state and local taxes each year, I have been treated very badly by the political leaders of both the city and state. Few have been treated worse,” the president tweeted. “I hated having to make this decision, but in the end it will be best for all concerned. As President, I will always be there to help New York and the great people of New York. It will always have a special place in my heart!”

#TheFlashback: CLICK HERE to find out what happened on “This Day in History.”

Not signed up yet for Fox News First? Click here to find out what you’re missing.

Fox News First is compiled by Fox News’ Bryan Robinson. Thank you for making us your first choice in the morning! Enjoy your day and weekend! We’ll see you in your inbox first thing on Monday morning.