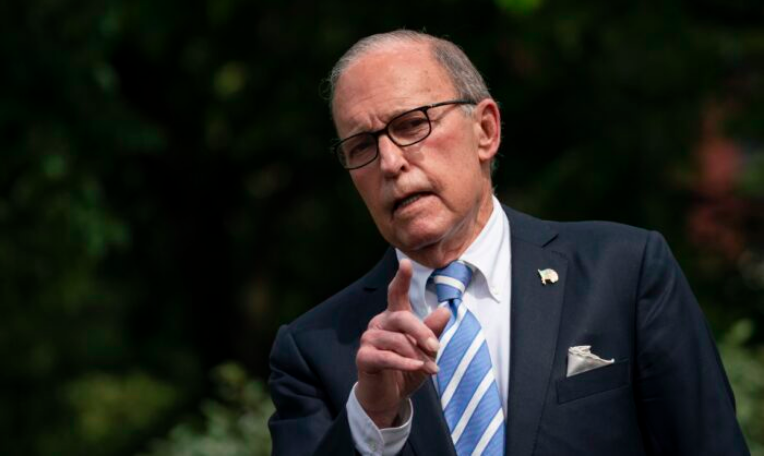 “In 15 years? Renewables are less than 10 percent of our total energy. And you’re not going to remake that in 15 years,” Kudlow said on WABC 770. “Pricing is not favorable. Natural gas is very cheap.”

“You couldn’t do it even if you wanted to,” Kudlow added.

Biden has flip-flopped on whether he would ban fracking, a key fossil fuel extraction technique that has propelled the United States to top of the list of the world’s oil producers. The former vice president said in the final presidential debate Oct. 22 that he would “transition from the oil industry.”

“It’s a big statement because the oil industry pollutes significantly,” Biden said. “It has to be replaced by renewable energy over time.”

Biden clarified his position after the debate in Nashville, telling reporters that the United States won’t be getting rid of fossil fuels anytime soon.

Biden’s official climate plan set’s a deadline of 2050 for the United States to reach net-zero emissions by ending fossil fuel subsidies and blocking new oil and gas leases on public lands, among other policies, including investments in clean energy.

Kudlow also commented on Biden’s tax plan, the potential impacts of which are a subject of debate among economists. The White House adviser said Biden’s planned tax increases on corporations and people making over $400,000 a year would result in the loss of $5 million U.S. jobs and reduce the U.S. GDP by 10 percent.

Kudlow was likely referring to a Hoover Foundation study released earlier this month. Biden, on the other hand, has pointed to a Moody’s analysis which suggests that his plan would generate 7 million jobs.

“If you follow through on the other team’s plans, you will lose $2.4 trillion of GDP,” Kudlow said. “Who would raise taxes after a damaging pandemic-related contraction? That team looks like stagnation, decline, and pessimism.”

“[Trump] is the candidate, frankly, of growth, prosperity, and optimism,” the economist argued. “That’s the largest difference between the two.”