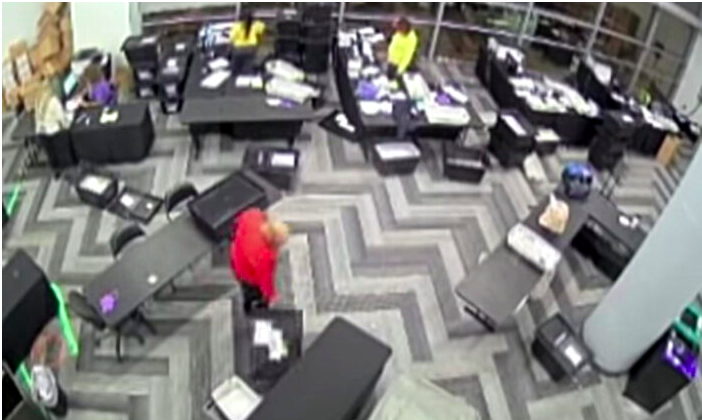 President Donald Trump said that Georgia Secretary of State Brad Raffensperger was unable to answer questions about boxes of ballots being wheeled out from under a table after Republican poll workers were told by Fulton County officials that vote-counting was done for the night on Nov. 3.

“I spoke to Secretary of State Brad Raffensperger yesterday about Fulton County and voter fraud in Georgia,” Trump wrote Sunday morning on Twitter.

The president said Raffensperger “was unwilling, or unable, to answer questions such as the ‘ballots under table’ scam, ballot destruction, out of state ‘voters,’ dead voters, and more. He has no clue!”

In response about an hour later, Raffensperger responded: “Respectfully, President Trump: What you’re saying is not true. The truth will come out.”

Respectfully, President Trump: What you're saying is not true. The truth will come out https://t.co/ViYjTSeRcC

What Trump was referring to was video footage obtained by Trump’s team from the State Farm Center in Fulton County on the night of Nov. 3 and early morning hours of Nov. 4. The footage showed Fulton County election workers ostensibly telling poll observers and other workers that counting was done for the night.

I spoke to Secretary of State Brad Raffensperger yesterday about Fulton County and voter fraud in Georgia. He was unwilling, or unable, to answer questions such as the “ballots under table” scam, ballot destruction, out of state “voters”, dead voters, and more. He has no clue!

But in December, Republican poll observers Mitchell Harrison and Michelle Branton said in sworn affidavits that at approximately 10:30 p.m. on Nov. 3 inside an absentee ballot-counting room at State Farm Arena in Atlanta, a woman shouted to everyone to stop working and return the following morning at 8:30 a.m.

“This lady had appeared through the night and Mitchell and I believed her to be the supervisor,” Branton wrote.

Meanwhile, the footage from State Farm showed “suitcase”-like boxes of ballots being wheeled from under a table on the night of Nov. 3 after the poll challengers left. After those boxes were pulled out, it appeared to show vote-counting taking place.

According to Shafer in a statement in early December, Fulton County workers “continued counting ballots in secret until 1 a.m.” Trump’s lawyers asserted that the video shows clear evidence of election fraud.

Officials with Georgia’s Secretary of State’s office have said the video footage does not show anything unusual.

“We have launched an investigation into why the monitors from the political parties left before scanning ended. While it was their right to leave early, we want to make certain they were not misled into thinking scanning had stopped for the night when it had not,” Walter Jones, a spokesman for Georgia Secretary of State Brad Raffensperger, told The Epoch Times in December.

Carlos Silva, a trial lawyer from Florida, who was a Republican poll challenger on Election Day, also said in an affidavit that he saw DeKalb County election officials pull out ballots with allegedly unusual features: they had a perfect black bubble filled out all for Joe Biden.

“I was able to observe the perfect bubble for a few minutes before they made me move away from the table. At no time did I speak to the poll workers or obstruct them in any way. I heard them go through the stack and call out Biden’s name over 500 times in a row,” he said, adding that he made observations of similar ballots being pulled out in Cobb County.

Debbie Fisher, an observer in Cobb County, said last Wednesday during a Georgia legislature hearing that she was part of the voter review for the Nov. 16 hand recount, noting seemingly anomalous features with military ballots that were cast in the county.

Fisher stated that on that day, she reviewed 298 military ballots in Cobb County. And of those, somewhere between 80 and 90 percent were going in favor of Biden. “Throughout the day, it made me sicker to see” them all going for Biden, she said, adding, “I find that statistically impossible.” In that part of Cobb County, she said, traditionally, voters typically cast ballots for Republicans—not Democrats—based on her experience in prior elections.